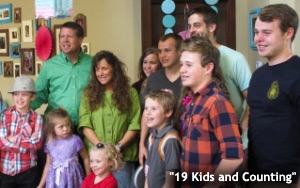 The suggestion has been made by some commentators that Discovery’s misfortune with “19 Kids and Counting” was somehow inevitable.

The networks of Discovery -- in this case, TLC -- traffic in shows featuring characters who are so unusual, the commentators say, that sooner or later one or more of them would be revealed to be concealing some odious past behavior.

The impetus for this hypothesis is the discovery (no pun intended) that Josh Duggar, 27 -- the eldest son of the “19 Kids” family -- was the subject of a child-molestation investigation 12 years ago. He seemed to try to own up to it in a statement last week, when the story became public. In the statement, he apologized for his “inexcusable” behavior, which he did not specify.

However, an admission of this type will never fly with the general public and TLC quickly -- and rightly -- issued a statement distancing itself from the Duggars. “Effective immediately, TLC has pulled all episodes of ‘19 Kids and Counting’ currently from the air. We are deeply saddened and troubled by this heartbreaking situation,” TLC said in a statement.

Whether this means production has ceased permanently was unclear. A gallery of “19 Kids and Counting” photos available for download on Discovery’s press Web site disappeared in recent days -- which can often be a sign that a show is a goner.

But on TLC's public Web site, its usual “19 Kids and Counting” landing page was still up and running on Tuesday morning, complete with dozens of show videos and other features -- plus, it should be noted, TLC’s statement about the show. The site even lists future air dates and times for the show, starting next week, in direct contradiction of the statement. That can't be right, can it? Oh well, I guess you can blame it on sluggish Web management -- something that's quite common on TV network Web sites.

Meanwhile, the commentators pointing fingers at TLC for the subjects the network chooses to showcase on its reality shows are using “Here Comes Honey Boo Boo” and its predecessor show “Toddlers & Tiaras” to support their thesis. “Toddlers & Tiaras,” the series about kiddie beauty pageants, was long criticized for, in the opinion of some (if not many), sexualizing young girls who were seen wearing various outfits and undertaking performances that many felt were inappropriate for girls their age. This criticism was not unreasonable.

But when it came to light last year that Honey Boo Boo’s mama was apparently dating a man who had been convicted of child molestation, TLC yanked “Here Comes Honey Boo Boo” and severed all relations with Honey Boo Boo and her family.

The common denominator in the “Honey Boo Boo” and “19 Kids and Counting” stories is child molestation, but there’s no reason to believe this subject is “common” to any other reality TV shows, either on TLC or any of the other Discovery channels, or on any of the other TV networks that specialize in reality TV such as A&E, for example.

Which means that it’s doubtful we will soon discover reality TV to be awash in questionable characters with dark pasts. However, if there’s a lesson to be learned from the “19 Kids” and “Honey Boo Boo” stories, it’s that greater care should be taken to vet and investigate the backgrounds of people who TV networks plan on turning into reality-show celebrities.