Promposal - The Crazy Cost of Getting a Prom Date

Prom season is just winding down and across the country parents are still trying to lift their jaws off the floor due to the costs of this annual rite of spring. The good news is that costs have come down when compared with recent years but that doesn’t mean they aren’t still high. At a meeting earlier this month, the CEO of a company told me his daughter wanted $100 to have her makeup done for her junior prom!

One of the notable trends of this year’s prom season — and one that is attracting attention and dollars is the promposal — elaborate invitations to be someone’s prom date. The promposal isn’t exactly new; The Washington Post published a history of the promposal last year, which traces its roots to Dallas in 2001. This year, though, things have gone to a whole new level. Press coverage of the phenomenon has exploded, MTV produced “Promposal Mania” (a two-day “celebration of prom,” and the lengths kids are willing to go beggar belief. Here are just a few examples of notable promposals from this year’s prom season:

Creating these promposals (or being bailed out after the fact) doesn’t come cheap. According to Visa’s recently released 2015 Prom Survey, promposals consume more than 30% of the overall prom budget:

One of the things that makes this relative representation of promposal in social media interesting is the strong showing of Twitter, which accounted for more than 90% of the mentions. 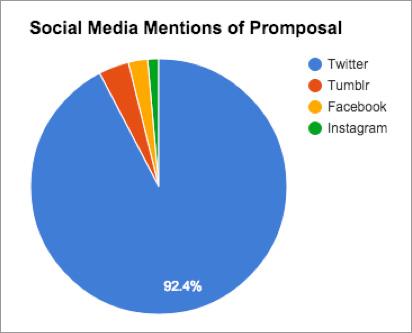 These numbers paint a very different picture of teen social media use than the one provided in Pew’s recently released “Teens, Social Media & Technology Overview 2015.” According to that research, the percentage of teens reporting which social media channels they use looks like this:

Overall coverage of promposal on the Web (excluding Twitter, Facebook, Instagram and Tumblr) dwarfs the social discussion. Over the same nine-day period mentioned above, promposal appeared more than 6,000 times on the Web vs. fewer than 600 in all the social channels combined: 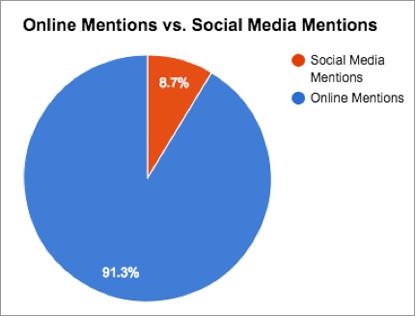 This is a very stark — and in some ways unexpected — difference. Given that teens are the ones participating in promposals, you might expect they would be driving the conversation. That isn’t the case. Most of the media coverage is focused on highlighting examples of outlandish, illegal or cute promposals.

That isn’t to say there isn’t plenty of social media activity around promposals. There are two promposal-focused Twitter accounts: The Promposal, with almost 25,000 followers but posts that are few and far between and Promposals, with more than 250,000 followers and posts that aren’t all promposal focused (or safe for work). The #promposal2k15 hashtag also features a nice selection of social content around the concept.

While brands and retailers might want to see some of the promposal spending (Visa puts the average spend at $324), few are actively promoting themselves, their products or their services through social channels. In looking at the social media channels for more than 100 mall-based retailers (The Brea Mall in Brea, Calif. was used to provide a sample), only three — Brighton Collectables, Taco Bell and Things Remembered — featured mentions of promposal.

Given the amount being spent, the volume of press coverage and the reach of social, promposals seem like a natural fit for teen-focused brands. Few took advantage of the opportunity in 2015. Perhaps more will do so in 2016.