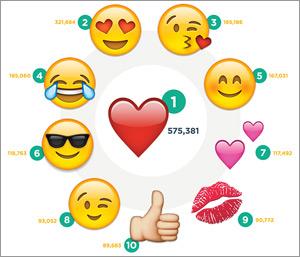 While some social networks struggle with nasty troll infestations, Instagram is experiencing a love fest of Woodstock-like proportions.

That, at least, is according to Instagramers’ use of emojis in hashtags, which the popular social network began allowing in late April.

Since then, the heart has dominated other single character emojis, according to fresh findings from social marketing and analytics firm Curalate.

Over the past month, the universal symbol of love was shared more than half a million times -- 575,381 to be exact -- in tandem with a hashtag, which was 79% more than the next most popular emoji.

A plethora of hearts, kisses, positive hand gestures and the perfect “100” all made the grade, too.

Overall, single use emojis have been hashtagged more than 6.4 million times since Instagram began allowing their use.

“Time and again, we've seen that Instagram is a place of positivity and celebration,” said Curalate CEO Apu Gupta. “With this analysis, we were able to get a deeper understanding of how consumers and brands use emojis [on Instagram] to communicate, and what we found was unambiguously optimistic and fun.”

While most brands are still getting acquainted with emojis, most young consumers are already well versed in the language. Nearly half of all comments and captions on Instagram now contain the colorful characters, the Facebook-owned network reported last month.

“If the overall trend continues, we might be looking at a future where the majority of text on Instagram contains emoji,” Thomas Dimson, a software engineer on the Instagram Data Team, said last month.