NBC News In A Twist As Williams Saga Continues 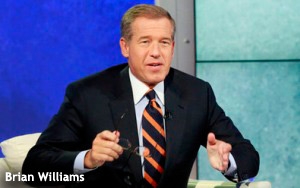 If you were betting on Brian Williams never returning as anchor and managing editor of "The NBC Nightly News," then you may be poised to collect on your bet.

It’s the latest wrinkle in the Williams saga -- a report emanating first from CNN, and then getting picked up all over the place, that the top brass at NBC News are contorting themselves into pretzels over how to bring Williams back into the fold without actually returning him to his former role.

In fact, now four months into an unpaid six-month suspension for telling tall tales about some of his assignments, Williams is still identified by his titles -- "anchor and managing editor" of "Nightly News" -- on NBC’s press Web site. That’s the destination for editors and reporters who write about television to go and download photos and collect information on network shows and personalities.

There are plenty of photos still posted there too, including images of Williams on assignment covering military action in Afghanistan, reporting on the aftermath of a hurricane in New Orleans (Hurricane Gustav, not Katrina) and cavorting with NBC late-night stars Jimmy Fallon and Seth Meyers.

You might conclude from all the resources on Williams that are still posted on this proprietary NBC Web site that NBC News is not yet ready to wipe its slate clean of him.

And so an effort is reportedly underway to devise a new role for him and in the process, perhaps rehabilitate his tarnished image.

One reason they’re not eyeing him for a return to the “Nightly News” anchor chair: Substitute anchor Lester Holt is holding his own against the competition and has steadied the ship (so to speak).

So what are they to do with Brian, since he’s still under contract and, it would seem, cannot be out-and-out fired without the network incurring some huge expense? At least, this is what so many of the Williams stories have indicated these last few months.

The problem is that fabricating a new role for him might be like trying to fit the proverbial square peg into a round hole. The challenge would seem to be: What title could you give him that wouldn’t seem like a demotion? "Special correspondent"? "Anchor emeritus"? You can’t name him "editor in chief," for example, because the staff at NBC News would mutiny.

Maybe they can employ the Ann Curry strategy. After she was dropped from "The Today Show," she remained at NBC News for three years as a correspondent and substitute anchor. She was seen on the air much less frequently, however.

While a new role as a correspondent or contributor might rankle Williams, a return to reporting fundamentals might be the best way for him to rehabilitate himself. Perhaps, over time, people will forget about his exaggerated stories or otherwise forgive him for them.

On the other hand, news organizations such as the New York Post don’t seem likely to stop calling him “Lyin’ Brian” any time soon in every story they publish about him. Plus, there were indications when this scandal broke that Williams was interested in exploring future career possibilities that had nothing to do with continuing on the path of TV journalism. You may recall he was rumored to be interested in being considered for the hosting jobs at both Jay Leno’s “Tonight Show” and David Letterman’s “Late Show” (never mind how far-fetched this idea seemed at the time, and even more so in retrospect).

Two months are left in this suspension. How it will end no one knows.

1 comment about " NBC News In A Twist As Williams Saga Continues ".
Check to receive email when comments are posted.
Next story loading