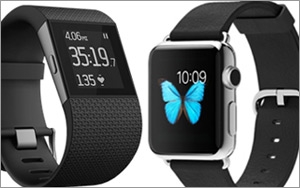 If industry estimates around the Apple Watch launch are even close to the mark, then it is poised to take a leadership position in the worldwide wearables market. Various investment analysts continue to guesstimate Apple will unload between 7 million and 20 million units this year. And most estimate that at least several million have been sold thus far, making Apple Watch among the fastest launches of a new product category.

The existing wearables market shipped 11.4 million units in the first quarter of 2015, estimates IDC. The market has gone up 200% since the year ago quarter. The market in devices, mainly fitness bands, did not slump after the holiday nor in anticipation of the Apple Watch launch.

Fitbit remains the clear leader for now, with 3.9 million units sold in Q1, up 129.4% year-over-year. The growth was fueled by a refreshed line of products. Fitbit has a commanding 34.2% of the worldwide market, but Chinese smartphone juggernaut Xiaomi entered the market last year with its Mi Band, sold in China.

The rest of the field trails far behind, with Garmin nabbing a 6.1% share, Samsung with 5.3% and Jawbone with 4.4%. A quarter of the market is shared among “others.”

The Apple Watch of course is not in the same price and product category as these dedicated activity/fitness trackers. But IDC analysts argue the Apple device will help redefine the market and exert pressure on less expensive devices to up their feature set game. The high end of the Fitbit line already sports a watch-like form factor and a wider interactive breadth than many rivals.

The market clearly is going to bifurcate once Apple Watch sales come into the picture. IDC notes that there has been significant price erosion in the category. We now see over 40% of devices coming in under $100, which certainly is helping to drive adoption. My guess is Apple will not consider competing in the budget market at all. The Apple Watch will dominate for now the high end, and a number of manufacturers will try to find a sweet spot that balances smartwatch functionality against cost in the middle.

What none of these shipment figures register is actual sales and then persistent usage. The real key to any new personal tech platform is ritual, not sales. How many Fitbits seemed like good ideas at the time and now sit in a drawer after its owner tired of self-quantification?

Arguably, even more than smartphones, wearables require a change of mindset, not just of media platform. Since fitness and self-monitoring are still at the heart of the category, these devices are pulling us towards a different relationship to our bodies and everyday activites. Some slip into this sensibility eagerly, and surely many others will not.

As I argued recently about the Apple Watch, it can be experienced as an empowering tool or as a kind of shackle. Back in the day when I wore mechanical watches, I strapped one on each morning so I could tell the time easily. Conversely, I feel obliged to mount up my Apple Watch each morning, in large part so it can time me.

Our relationship to these devices will be as varied and personal as the individuals being prompted to strap one on.