What You Don't Know About Programmatic Will Hurt You

The first blind spot for advertisers is not knowing where your programmatic budget really goes -- and how little actually buys viewable media. This pain point is clearly revealed once you’ve seen your own cascading waterfall of programmatic transaction fees.

You’ve probably seen this waterfall chart in a few forms. The WFA created one, Rubicon’s S-1 filing refers to a 60% tech tax, and this topic has also been reported by many others. No matter which version strikes your fancy, these are conservative estimates that reveal the grim situation brands face today. And the real truth is probably even worse when all the details are uncovered. The good news is that help is on the way with tools like AD/FIN’s upcoming research study with Ebiquity. As AD/FIN CEO Andrew Altersohn recently said, “There’s no need for advertisers to be trading in the dark. It’s their money -- and by taking greater control, they can see exactly how their budgets are being spent.”

Ever since Jon Mandel reconfirmed all the media rebate shenanigans, more and more brands have become compelled to know how much of this type of value extraction touches their world. This, in turn, has contributed to an unprecedented number of brands putting big media agencies under review.  While there are always reasons for undertaking an agency review, the new reality -- where transparency is not up for debate --  is designed to ensure an agency is not just doing things right,  but, more importantly, doing the right things.

Your waterfall chart is a cornerstone of true programmatic resource planning.

Brands face many nuanced considerations when planning the next 10 years of programmatic achievement and mastery. They know the opportunity is massive, they know programmatic spend will grow, and they know there are no silver bullets. So having a detailed programmatic plan starting today should be a top priority. Creating your own detailed waterfall chart is a great starting point, with a few big advantages:

1. You can’t fix what you don’t know is “broken.”
2. Once you see it with total clarity, you have a benchmark to work from and optimize against.
3. Tracking it over time will also empower you to make much smarter decisions as programmatic continues to evolve.

The first two chart bars (below) are straightforward. Brands know their budget (and their bills) and how much they pay their agency (Note: you have to convert on-top fees into net fees).

The next trading stack toll is the Trading Desk and DSPs. If an agency runs its own trading desk, it probably runs some form of arbitrage funded by clients. Brands need to know how these numbers shake out. For example, does the brand pay the agency the bid price on winning bids, while the true media cost to the middleman is the clearing price? What flavor of arbitrage is being practiced? Is the value-add worth it?

In other, more-perverse cases, the trading desk outsources actual trading to a managed service DSP that typically takes a large black-box margin. While it's hard to understand the value-add of assigning an account manager who assigns yet another account manager to get the job done, this practice is all too common, non-strategic and symptomatic of programmatic complacency.

Adding salt to the wound, agencies also strike volume kickback deals with DSPs and then throttle media spend one way or the other in order to fully exploit the deal. This sub-optimal and poorly aligned setup results in unaccounted-for media waste, ranging from poor-performing DSPs (all fishing from the same pond), to viewabiltiy issues and many other flavors of impression and click fraud. The good news is that it's all largely avoidable.

So, no matter which way a particular brand cuts it, the end result is directionally the same: inefficient media allocation that could easily be put to work to better meet the brand's intended objective.

One key that unlocks knowledge is getting direct access to your bid-level data. Until this is done, it’s practically impossible to properly account for your programmatic budget and build a plan to optimize it. More good news: This can be obtained today simply by asking for it (at the log level) or switching to more transparent partners who are willing to provide it.

Robust and complete bid-stream data is very valuable on its own, and even more so when used in conjunction with other DMP data sources (such as redirect path data). This kind of  data is not a nice-to-have, it’s a must-have for brands that want to compete on programmatic mastery, and it should be thought of as a prepaid, brand-owned data asset.

Remember, what you don’t know will hurt you -- so get in the know today!  As more brands start to get the programmatic job done, they will know and control way more, nobody gets hurt, and the market will become exponentially more valuable. 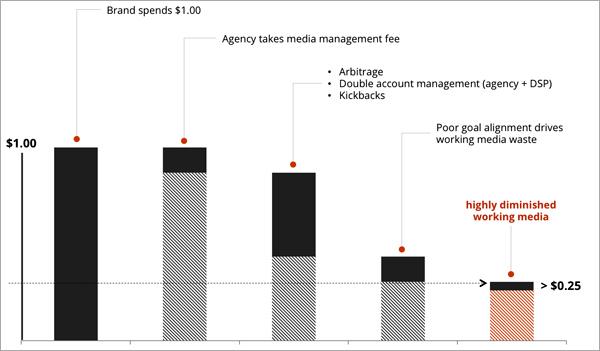