CNN Singles Out 'The Seventies' For Another Decade Documentary 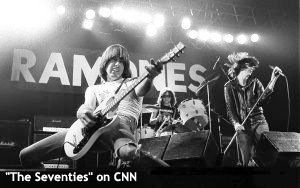 We really like to wrap our history up in neat little packages, don’t we?

But what are these years but mere time periods on a calendar? In and of themselves, they’re not more important than any other years. It just seems as if in retrospect, some years are more loaded with events and personalities we remember than other years.

And even that’s deceptive for the simple reason that we can’t really remember everything that happened in a given year -- grotesque crime stories, sensational trials, celebrity deaths, Academy Award winners, Super Bowl champions and the like. Quick now: Who were the big winners at the 2014 Oscars? You have no idea, right?

To help us remember such things, whether we want to or not, several TV networks have been packaging our recent history into “decade” specials. So, instead of a single year that “changed America,” we have these 10-year periods packaged and promoted in a similar way.

VH-1 used to do these “I Love the [insert decade here]” specials that featured comedians and C-list celebrities making fun of various decades. More recently, National Geographic Channel produced a look at the 1980s that was subtitled “The Decade That Made Us” (it did?) and another one about the 1990s that was subtitled “The Last Great Decade?” (how are we to answer this question exactly?).

Now comes CNN with an eight-part docuseries about the 1970s. It starts on Thursday night (June 11) at 9 Eastern. Titled “The Seventies,” this eight-hour series carries no discernible subtitle, but on CNN.com, it is being promoted with the tagline “One Nation Under Change.” CNN did a “Sixties” docuseries last year. And an “Eighties” doc is in the works for next year.

Still, historians and TV networks are hellbent on identifying trends, “moods” and events that they can position as uniquely symbolic of a specific time. Maybe this approach helps some people understand these years and decades better.

On “The Seventies,” various installments will deal with television (the topic of this week’s premiere episode), Nixon and Watergate, the Vietnam War, popular music, the Iran hostage crisis, terrorism and “the sexual revolution,” according to a CNN press release. Hey, wait a minute, didn’t the sexual revolution happen in the ’60s? That’s the impression I have formed from past decade documentaries, and also “Mad Men.”

Is this the same revolution, only it was so long that it crossed over from the ’60s to the ’70s? Or is this a different one? Hopefully, this question will be answered in “The Seventies,” which is produced for CNN by Tom Hanks and Gary Goetzman, principals in the production company known as Playtone.

Let it be clear that whether or not anybody finds these decade documentaries educational or entertaining is entirely up to them. I sometimes wonder who these shows are aimed at. Do they appeal mainly to those of us who are old enough to remember these eras and are looking for a nostalgic trip back to them? Or are they of greater interest to viewers too young to have any relationship at all to these past decades, but seek to learn more about them?

Perhaps the audience for “The Seventies” will be made up of people from both of these groups. Personally, as one who lived through both the ’60s and the ’70s, I have no great desire to relive either decade. The older I get, the more I seem to adopt the philosophy of some older people I have met over the years who were fond of using one or the other of two phrases that basically mean the same thing -- “don’t look back” and “keep moving forward.”

The last great decade? With any luck, that decade is far in the future and yet to come.

“The Seventies” premieres Thursday night (June 11) at 9 Eastern on CNN.

tv
1 comment about " CNN Singles Out 'The Seventies' For Another Decade Documentary".
Check to receive email when comments are posted.
Next story loading