JetBlue Entertains Customers On The Ground 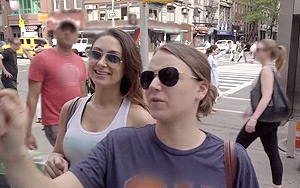 Air travel has certainly lost some of its romance, but that doesn’t mean interacting with the carriers themselves can’t involve some levity and fun.

With three separate installations in key markets (New York and Fort Lauderdale, Fla.) JetBlue Airways has been trying to inject a little personality into the staid world of travel, representative of how it treats its customers in the air.

One installation, called “Wingman,” combined the notion of an automated information system with the surprise of real-life, real-time interactions. At a Chelsea storefront in New York City, passersby were encouraged to interact with a virtual JetBlue crew member who would showcase the airline’s points of difference (such as more legroom and better snacks).

As the interactions went on, responses become more specific to the customers (commenting on their shoes, for instance). Eventually, the crew member emerged from inside the building to reward the customers with travel vouchers and prizes.

“It was taking down that wall of what seems like a passive experience [to one] that rewards the consumer,” says Anthony Petrillo, senior executive vice president at Pearl Media, which created the installations for JetBlue and its agency, Mullen Lowe. “The goal was to show the overall humanity of how JetBlue rewards its customers.”

Meanwhile, in Florida, Pearl set up a digital interactive game at Aventura Mall (the nation’s second-most trafficked mall just north of Miami). Pearl built the installation to look like the inside of a JetBlue airplane, and the game involved lifting the window shades to see aerial views of unique destinations reachable via non-stop JetBlue flights out of Fort Lauderdale (with players prompted to guess what destination they were viewing).

The installation was intended to attract Miami-area travelers to consider traveling JetBlue out of Fort Lauderdale’s airport.

While the content of the activation was engaging, Petrillo says a key component of the installation’s success (which racked up nearly 9,000 interaction and more than 1,600 email submissions) was its location in the nation’s second most-trafficked shopping mall, which lies north of Miami (and thus closer to Fort Lauderdale).

“Sometimes it’s the placement that matters as much as the activation itself,” Petrillo tells Marketing Daily. “Hopefully, with the geographic location of the mall itself, it would skew toward the population of north Miami.”

Finally, to promote its new nonstop service to Curacao from New York, JetBlue set up a storefront in New York’s meatpacking district, which featured an interactive digital window showing off eight Curacao attractions. Passersby were encouraged to take a selfie in front of the destination photos, and share them via Instagram to enter a sweepstakes for a vacation package to the Caribbean island.

Though all three of the installations were created and run separately, they’re indicative of the brand’s overall strategy to entertain and educate consumers in a unique and engaging manner, says Dan Madsen, associate creative director for Mullen Lowe U.S.

“While each of the three executions is uniquely innovative and technologically driven, there is a JetBlue wink at every touch point,” Madsen says. “Each out-of home-activation brings to life the fun, quirky, egalitarian spirit of JetBlue in a way that’s consistent with what customers experience at 35,000 feet.”