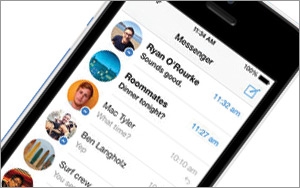 “Happy to make it to the very exclusive Android 1 billion+ downloads club,” Davis Marcus, head of messaging products at Facebook, boasted in a post on Tuesday. The achievement is further validation for Facebook -- and its controversial decision to separate Messenger from its core Facebook app, last year.

Indeed exclusive, only Facebook and Google have birthed apps that have broken the Google PlayStore’s billion-download barrier. The club includes Gmail, YouTube, Google Search, and Maps, along with Facebook’s flagship app and its WhatsApp messaging service.

Several months after the move, CEO Mark Zuckerberg used a “town hall” meeting to address the diversification strategy. “On mobile, each app can really focus on doing one thing well, we think, and the primary focus of the Facebook app, today, is News Feed.”

At the time, Zuckerberg admitted that requiring more than 1 billion users to install a separate messaging app was a “big ask.” Yet even though “it was a short-term painful thing to ask people to install [another app], we knew we could never deliver the [right] quality experience as just a tab in the main Facebook app."

Despite a healthy approval rating of 3.9 out of 5 stars by Google Play users, some people still resent Facebook’s decision to break off Messenger.

“U [sic] have got one billion downloads because u [sic] didn't left [sic] any option for users other then [sic] downloading this app,” one user complained in the comments sections of Marcus’ post.

Facebook clearly has big plans Messenger. Earlier this year, it officially turned the service into a platform for developers to directly distribute their apps to users. Trying to upend customer relationship management, Facebook also recently announced plans to position Messenger at the center of business-to-consumer communication.

In addition to purchase confirmations, the Businesses on Messenger program are expected to facilitate direct conversations between businesses and consumers and provide a direct channel for various updates and notifications.

With the big Messenger changes, Facebook is following the lead of Line and other platforms, which have been redefining the definition of a messaging service. Some in the industry see Facebook’s focus on Messenger as a bit defensive.

Defensive or not, Facebook has recently sought to bolster Messenger with a growing list of features. Just last week, it added a peer-to-peer -- or friend-to-friend -- money transfer service to Messenger.