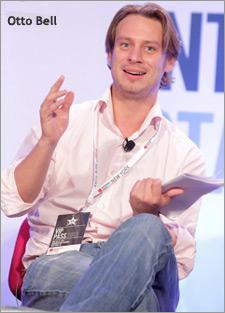 It’s all about relevancy, Otto Bell will tell you: finding that kernel of a story within every brand that provides some kind of utility, or deepens a viewer’s understanding of a subject, or even just evokes a smile. This requires that brands “rethink their modus operandi a little bit and recognize that they are sometimes sitting on stories that are oftentimes of really wonderful societal relevance,” he feels. That’s not something often said about the :30.

Besides “drumming up business” for Courageous, the branded content studio Turner Broadcasting announced this week for its news brands CNN and HLN, Bell has been spending most of his time polishing its approach to content marketing while recruiting an “editorially minded,” full-time team of producers, designers, videographers, Web developers and data scientists who will not only identify narrative hooks but also produce compelling multimedia content ranging from video — the organization’s “native tongue” — to Web slideshows to live events. All, of course, must then be “optimized for success on social platforms.”

But what really excites the Courageous vice president and group creative director since he departed his position in March as creative director at OgilvyEntertainment, after a nine-year run, is the third element in a methodology he has dubbed RED: for relevancy, execution, and distribution.

“When you are inside of an agency environment, you are a couple of more steps removed from the audience,” Bell points out. “It’s one thing to create beautiful branded content that ticks off all the boxes and tells a great story but if nobody sees it, if it doesn’t have the distribution, then it’s that old adage of a tree falling in the forest.”

The opportunity of having stories his team creates potentially seen by millions of viewers has been “an enlivening experience,” says Bell, who worked at Y&R and WPP before becoming employee No. 2 at OgilvyEntertainment.

While at Ogilvy, Bell created both long- and short-form branded content for clients including IBM, Cisco, Thomson Reuters and The Economist. Notably, he was producer and creative director for the Dupont “Horizons” project with BBC World News, a series of two-minute doc-style commercials that showed how DuPont's scientific capabilities tied into the topic being covered by BBC financial correspondent Adam Shaw.

Bell now finds himself standing in front of a robust palette of CNN properties to distribute through: CNN and HLN live news and original programming, CNN Digital Studios, CNN Films, CNN Airport Network, as well as digital platforms such as CNNgo and others.

“A lot of the plumbing is already in place,” he says, in terms of slots for native branded content in CNN’s various distribution channels. “It’s almost an embarrassment of riches for someone coming from the agency side.”

That said — and throwing in additional options for content such as Apple Watch and Snapchat (for which CNN provides daily news stories) — “We’re not just going to be throwing in bells and whistle for the sake of it,” Bell avers.  Snapchat branded content, he says, “will be characterized by its newsworthy aspect, as clear as a Roman road running through our work.” But it will be “clearly labeled as sponsored” to maintain CNN’s editorial integrity, he clarifies, echoing a point made in the company’s news release.

Courageous is talking with some advertisers that “would not traditionally have looked to CNN,” Bell says, as well as “having different types of conversations with existing advertisers.” As for execution and distribution of those story lines, the studio is “off and running” with a couple of productions that will launch late this summer.

Bell is looking to put together an initial team of about a dozen professionals but says he expects Courageous to grow “exponentially.” Heading the top of the help-wanted list is an editorial director.

“I’m looking someone to partner with me on this endeavor,” he says. “I want them to bring their point of view to the table so I’m being very careful and talking to a lot of folks.”

Get your resumes in.