This story begins with Frank Zazza asking if I want a lift. Normally, that might not seem like an unusual offer, but seeing as we’re stepping out of the New York Athletic Club in the middle of a busy workday onto Central Park South, I’m thinking it’s probably easier for me to grab a cab, or even walk, vs. the hassle of retrieving his car from a garage nearby?

“It’s right here,” he says, as we step onto the curb. Sure enough, there’s a big black GMC Yukon parked right in front of us in a no-standing zone. With its tinted windows, the vehicle could easily be mistaken for the kind you might see the Secret Service using to whisk a VIP around Midtown in. That’s no mistake, Zazza says: “It’s the same one President Obama uses.”

Zazza is not connected to the Secret Service -- as far as I know -- but he is, in many ways, a connected guy. And the point of this opening anecdote is to illustrate how he creates influence by making connections.

“Look at the plates,” he says. Sure enough, the license plates on his SUV read “NYC FILM.”

“Wow, how’d you get those?” I ask, assuming it was through one of his connections to New York City’s film industry.

“They’re just vanity plates,” he says, letting me in on one of the secrets of how he connects things to create the perception of, if not, actual influence.

In the end, it doesn’t matter, because the results are the same. There are no tickets on Zazza’s windshield.

“Have you ever gotten a parking ticket?” I ask.

It was the first time I had seen Zazza since he sold his last company -- product placement and branded entertainment measurement firm ITVX -- to Rentrak (now comScore), two years ago, and I was surprised by the story he told me about what he has been up to since then.

Zazza is the last guy I would have expected to have had literary aspirations. It’s not that he’s not creative. In some ways, he’s one of the most creative people I’ve ever met. Just consider the opening anecdote. But most of the creativity I associated with him has had to do with creating business opportunities for brands. I mean, literally, creating them where none existed before. You see, Frank Zazza is the father of  modern-day branded entertainment -- what we used to call “product placement,” and nowadays call “content marketing” -- business.

He’s not the first guy to do it, for sure. But he’s the guy who got us thinking about the true potential for integrating brands with content, especially entertaining content, that almost every brand has been trying to emulate since. Among other things, Zazza is the guy who placed Reese’s Pieces into “E.T. the Extra-Terrestrial,” which arguably helped create two of the most valuable brands the world has ever seen.

It may seem obvious now, looking back at that seamless integration from the vantage point of 2016, but back in the early 1980s, when Steven Spielberg was just beginning production on the popular science fiction film, it was anything but.

In fact, Zazza originally pitched the idea to Mars Inc. (now Masterfoods) for its trademark M&Ms candy brand. But when Zazza met with the Mars brothers, they said, “Whad’ya kidding, you want us to put the family jewels in what?”

It was right after the release of scary Sci-Fi film “Alien,” and Spielberg’s last film was the equally scary “Jaws,” so it’s understandable that Mars took a pass.

Zazza immediately pitched The Hershey Co. on the idea of placing their trademark brand, Hershey’s Kisses, in the film. While they were equally reticent to do so, Zazza convinced them to give it a whirl with a new line extension of their Reese’s Peanut Butter Cups. And the rest is content marketing history.

Since then, Zazza has developed some of the most memorable and enduring product integrations in modern marketing, which eventually led him to take on a more strategic role of researching and measuring their effectiveness, which led to the creation of ITVX. And the story -- for MediaPost readers -- might have ended there, except for the call I got from “my best friend, Frank.” (Don’t worry, there’s no patronage in this article. Zazza calls everyone his "best friend." Trust me, take his meeting and you’ll understand.)

As I said, I was a little flabbergasted when he explained that he’d just completed his novel, the appropriately titled “Connected Guy,” and that he was sending me a review copy. I explained I’m not a literary critic and don’t really write book reviews, but he insisted, and this article is the result. And this story would pretty much end there, except that there’s more to the novel then the culmination of Zazza’s literary dream. There’s also a unique business opportunity for brands.

The novel is a semi-autobiographical fictionalization of a period in Zazza’s life when he was managing a popular dance club on New York’s Upper East Side in the early 1980s, which happened to be popular with “connected guys” -- you know, the kind that have connections to organized crime. I don’t want to spoil it for you, but it’s a recreation of true-life events that happened when some of the characters of the original “French Connection” dope-smuggling ring reunited and connected in Zazza’s club.

The novel is written in an authentic way that draws from Zazza’s -- a native of Brooklyn who no doubt has some actual connections -- life experience. It also draws on his connections to the world of brand marketing. Brand references are abundant on every page, and one of them even plays a pivotal role in the story’s narrative. And that’s where this story -- the one about Zazza’s next venture -- gets interesting for the readers of MediaPost.

While he was working on his novel, Zazza had an epiphany that literature could be the next big content-marketing opportunity for brands. So simultaneous with the release of his new novel, Zazza is launching a new company, aptly named “Brands In Books.”

That one also reads like a book, literally. Go to the Web site and you’ll get the idea. Utilizing an ebook reader format, the site explains the venture’s business model of connecting the right brands with the right authors to create the right literary narratives that work for the brand, the author, and most importantly, the reader.

While placing brands in literary narratives is not unheard of, Zazza wants to bring some new marketing science to the process to ensure it is a win-win-win situation. The science, which Zazza calls “brand fingerprinting,” is a “patent-pending” methodology that begins with an audit of a brand’s “character” and then aligns it with the storytelling attributes of the fictional characters of a literary work based on its author’s audit of his or her work.

“It creates a brand’s fingerprint and matches it to the character’s fingerprint,” Zazza explains, adding that the method includes a combination of 15 core attributions aligning “demographics, psychographics, personality and voice” to “eliminate the subjective guesswork and focus group”-type research that would normally be done to make such an assessment.

The method “results in a 99% match accuracy,” Zazza claims, adding that to help launch Brands In Books, Zazza is giving the research away for free to any brand that wants to have its attributes fingerprinted. There’s no obligation, he says. When Brands In Books finds a match with an author or literary work it is helping to develop, it will simply alert the brand or agency about the match and it’s up to them whether they want to consider an integration.

The deal logic is simple, he says, noting that it will be a revenue-sharing model between the author (50%), the publisher (25%) and Brands In Books (25%).

The placement is based on a “CPV,” or “cost per view model, Zazza says, based on a calculation that combines the quantitative reach (number of books sold) with the level of “engagement” of the brand’s placement in the the book. The engagement value is based on a method Brands In Books has developed for assessing ho 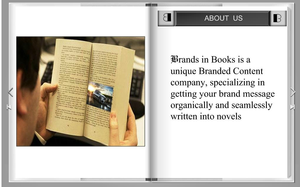 w integrated the brand is in the book’s narrative, on a scale ranging from casual mentions to playing a role as an integral character.

The pricing model, he says, should end up being something like $1 per book, because it is based on the premise of a highly engaged impression of someone reading a book with a brand integrated into it, plus some pass-along readership and the potential for residual brand references in social media, as well as literary adaptations into other works -- potentially films.

On the flip side, Zazza sees brands playing a more integral role -- when appropriate -- in helping to promote the literary works they are integrated in via consumer marketing promotions that tie into the books.

Zazza concedes that the concepts are still formative, but like any great creative idea, he says, you start with the concept and develop, refine and edit from there.

Needless to say, not every integration is an appropriate match for a brand, and that is why Zazza believes his fingerprinting method will make the market opportunity work.

He draws on his history in the movie product placement business to offer an example that was a less-than-perfect alignment.

After the success of “Rocky,” Zazza says a major brand asked him to help integrate a product placement in Sylvester Stallone’s next movie. It flopped.

The difference, he said, is all in the character.

And if you can’t tell by what I’ve written so far, I believe Frank Zazza has plenty of that.