Post-Dave Ratings Indicate Two Jimmies Have Not Inherited His Audience 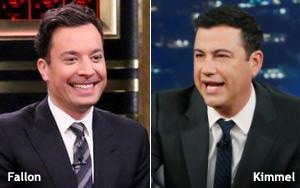 With David Letterman now out of the late-night picture, you might think the two Jimmies would be picking up his audience.

But that might not be the case, if it’s possible to draw this conclusion from the latest ratings -- the first meaningful weekly averages in the post-Dave era.

These weekly late-night ratings reports come out every Thursday, covering the previous week. Letterman brought the curtain down on his CBS “Late Show” on Wednesday, May 20. The following week -- May 25-29 -- Jimmy Fallon and Jimmy Kimmel were in repeats.

But they were both back with new shows last week (June 1-5), which means we might be able to use the week’s ratings results to come to conclusions about the composition of late-night TV minus Letterman. It should be noted that Kimmel’s week was not quite a normal one. “Jimmy Kimmel Live” was delayed on Thursday, June 4, by an NBA Finals game on ABC, and he aired a repeat on Wednesday, June 3 (and always has a repeat on Fridays). Still, Kimmel’s average for the week was not far off his usual numbers.

According to the ratings report released yesterday for last week, total viewers for Fallon’s “Tonight Show” averaged 3.538 million and “Kimmel” had 2.406 million. In the demo (18-49), Fallon had a 1.0 rating and Kimmel had an 0.65. For the season-to-date through last week, Fallon was averaging 3.922 million total viewers nightly, and Kimmel was averaging 2.68 million. In the demo, the season average has been a 1.14 for Fallon and 0.63 for Kimmel.

So the numbers for “The Tonight Show Starring Jimmy Fallon” and “Jimmy Kimmel Live” for the post-Dave week of June 1-5 were not far off from their season-to-date averages. In fact, they were a little down (except for Kimmel’s demo rating), due possibly to the usual decreases in viewing levels when the summer season sets in.

But one thing that didn’t happen: Neither seemed to have collected viewership from the absence of Letterman. “Late Show with David Letterman” ended its run with a final-season average of 3.007 million total viewers (and a 0.56 rating in the demo). The average was pulled upward by an increase in viewership in Letterman’s final weeks as his last airdate drew near. A more “normal” average for the Letterman show without the finale spike would likely have been in the mid-2 million range.

So you might conclude that there were roughly 2.5 million regular Letterman viewers who might now be looking for a late-night show to watch every night. And until Stephen Colbert takes over “The Late Show” in September, their choices at 11:35 are either Fallon or Kimmel.

But it doesn’t seem like they’ve chosen either one of them. Incredibly, CBS’s average in the former Letterman time period last week was 2.378 million -- a 0.48 rating in the demo -- for repeats of “The Mentalist.” These numbers are about what the Letterman show was drawing normally.

This week, “The Mentalist” reruns have been replaced by repeats, from this past season, of “CSI: Crime Scene Investigation.” Both of these crime shows have ended their regular prime-time runs. “The Mentalist” had its final first-run episode last February. “CSI” will be given a chance to say farewell with a two-hour, one-off special at the outset of the fall season.

So what is the Letterman audience watching? Maybe some of them are so loyal to CBS that they’ll watch anything the network puts on at 11:35 -- be it “The Mentalist” or a test pattern. But that doesn’t seem realistic.

Anecdotal evidence -- which by its nature is not definitive -- suggests that Letterman’s audience, who skewed older than the audience for either of the two Jimmies, are in fact done with late-night TV. They can’t warm to the antics of the two Jimmies (especially Fallon) and in the absence of Dave (and also Jay Leno), they’re feeling like they basically don’t have a late-night show to call their own anymore.

Some might even be watching “The Mentalist” and “CSI,” but I suspect that for many of them, it’s lights out at 11:35.