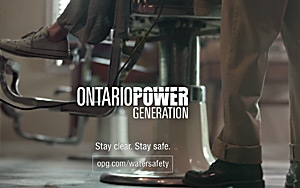 As one of Canada’s largest clean energy providers the Ontario Power Generation's (OPG) spends a lot of its marketing effort trying to convince people that that its fleet of nuclear, thermal, and hydroelectric generating stations are safe.

Now, however, OPG and its ad agency KBS+ Toronto are evolving its message through the new "Power of Water" campaign. Through research, the companies learned that the water safety message could be more effectively communicated if people better understood OPG's role in the energy sector.

"In this character study of water, the campaign addresses both its power and its benefits for Ontarians in its ability to 'change lives.'" says Marie Magnin, Group Account Director, KBS Toronto. "But as Ontarians head into summer and find themselves in activities near water more often, the campaign seeks to drive awareness of the dangers of water around OPG’s dams and hydroelectric stations."

The campaign, which interweaves both safety and reputation, runs across broadcast, radio, print and digital channels. It aims to reach Ontarians who are likely to participate in recreational activities in and around Ontario’s waterways.

KBS+ Toronto has worked with OPG since 2012.