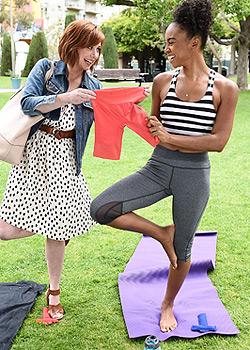 In a new campaign for Skimmies slipshorts, Jockey is hoping actress Alyson Hannigan can win more women over to this hybrid form of undies: It smooths like a slip, looks like shorts and doesn’t strangle like Spanx.

The brand was introduced three years ago for a diverse group of women, including those who like dresses but fear inadvertent exposure, or who want some of the effects of shapewear, but without any of the girdle-like discomfort that comes along with compression fabrics. “We’ve had more than 2,000 reviews since then,” says Jessica Burns, director of integrated marketing at Jockey International, “many describing exactly the kinds of situations when they wear their Skimmies. Those stories became the inspiration for this campaign.”

The result is a digital and social media effort, #SavedBySkimmies, set to break this week. From Laird + Partners, the Hannigan videos are said to highlight some of those “sweaty, staticky and skirty moments of summer.” The four videos all direct women back to a microsite called The Solutionary, and explain how Skimmies can rescue them from such seasonal undie fails as “The Friction Affliction,” or “the bow-legged stride that aims to keep a dreaded thigh fire from ruining your day;” “The Flash Cycle,” “trying to keep covered when an unexpected breeze picks up;” “The Namaste Dry,” “when the hard work pays off but sweating it isn’t your style,” and “TheFlamingo,” “a multitasking mom technique used when the show must go on but showing too much skin isn’t in the script.”

While Hannigan’s appeal to young moms is strong, “and she’s got the authentic, girlfriend-to-girlfriend appeal,” Burns tells Marketing Daily, “our target audience is much broader. My niece wears Skimmies, and so does my mother.” And the product is meant to appeal to any woman who has ever worn bike shorts or leggings under a dress to prevent such problems. (There’s even a girls’ version, to make monkey bars worry free. “Girls like to call them 'cartwheel shorts,’” she says.)

Jockey, based in Kenosha, Wisc., is privately held and doesn’t divulge sales for its brands. But NPD Group, the Port Washington, N.Y.-based market research company, says for the 12-month period ended in May, sales of women’s underwear and intimates is essentially flat, at $10.9 billion.