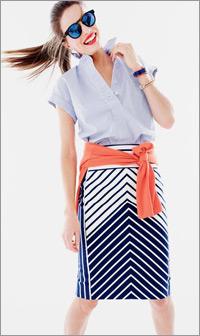 Hoo boy. Already battling bad publicity on several fronts, J. Crew has found itself in the midst of an ugly media storm — and one that is likely to take a bite out of its already-dropping brand value.

After a $520.6 million quarterly loss caused it to lay off 175 people last week, the New York Post broke the story that several of its executives gleefully partied after the layoffs, celebrating their survival. In one Instagram image, they actually jumped for joy, invoking phrases from “The Hunger Games” (you know, the one where teens are encouraged to hunt and kill each other.) They celebrated the Darwinian event with plenty of photos posted on social media, with hashtags like #hungergames, #maytheoddsbeeverinyourfavor, #forthewin and #damnitfeelsgoodtobeagangster.

A J. Crew spokeswoman told Women’s Wear Daily that it does not condone this behavior and that it had already taken action and WWD is reporting that one of the executives, a VP of men’s merchandising, has been shown the door. But some experts think the brouhaha won’t go away quickly.

In the pre-Instagram past, stories about executives behaving badly usually played out in the business press, often blowing over without much consumer awareness. “But while this may be a business story, as it reaches out into the social mediascape, consumers can't avoid it and become entwined in it,” says Robert Passikoff, founder and president of Brand Keys, the New York-based brand engagement and customer loyalty research consultancy. “It doesn’t take a whole lot to share this again on social media, and before you know it, a pebble becomes a tsunami. And very few brands come out unscathed.”

J. Crew ranked as the No. 1 apparel brand in Brand Key’s most recent annual loyalty rating. But for the last several months, even before “The Hunger Games”gaffe, it’s been awash in unflattering ink.

First, there have been all those headlines about how its clothes, once favorites of everyone from actress Katie Holmes to First Lady Michelle Obama, are boring: “J. Crew left adrift by fashion’s tides”; “Dear J. Crew: What happened to us? We used to be so close,” and “Sorry, J. Crew. Female shoppers just aren’t that into you.”

Then there was the recent dust-up about a catalog page that many saw as racist, with the line “We own them” splashed around an African-American man in shorts. A closer look revealed the page actually read “Stripes. We own them,” but that didn't stop the Internet from having plenty of fun at J. Crew’s expense. (A Reddit thread included comments like “More like J. Crow” and “They don’t use UPS, they use the Underground Railroad.”

In addition to the layoffs, the company announced it was putting Somsack Sikhounmuong, formerly head of design for its Madewell unit, in charge of women’s design, replacing Tom Mora.

While it’s hard to say what it will take for J. Crew to turn perceptions around, Passikoff says that any brand can only count on a fixed amount of forgiveness. “Loyalty and high engagement, which J. Crew has had in the past, guarantees brands a certain buffer zone. You can screw certain things up and consumers are six times more likely to give you the benefit of the doubt.”

But after that, he says, while there are both emotional and rational considerations, “it really comes down to what the line looks like. People don't buy what they don’t want.”

And that could very well factor into the way consumers react to J. Crew’s latest blunder. Shoppers who chose not to buy defective yoga pants from Lululemon after its founder said women’s fat thighs were the issue, or to spurn Abercrombie & Fitch after its founder said the brand was only for thin, attractive people, he says, “probably didn't like the clothes they were selling anyway.”

And this corporate hubris? “We’ll see,” he says. “But there isn’t a bottomless pit of consumer forgiveness.”