Extinction Event: Why There May Be Far Fewer Brands At Cannes 2025

The Cannes Lions kicked off with an inspiring, and yet oddly demoralizing presentation predicting some “big hairy provocations” for the future, and the tools brands and agencies can use to deal with them. The provocations were presented jointly by Razorfish Global CEO Tom Adamski and Contagious Communications Director of Content & Strategy Will Sansom in a session prosaically entitled “Toolkit For Transformation.” It proved to be anything but. It was more like a struggle over life and death, or maybe even outright extinction for advertising and branding as we know it.

Take big hairy provocation No. 1: “We think in the future brand loyalty will become extinct,” predicted Sansom, citing an increase in brand switching, regardless of the category, and referencing an Accenture study placing the value of the “global switching economy” at $6.2 trillion.

Pointing to the number, Sansom said, “Right here is proof that brand loyalty is becoming extinct.”

He then gave the example of a new startup called ByeBuy that is doing for physical technology products what Spotify did for music and Netflix did for video, enabling users to subscribe on a “pay-as-you-go basis when you need them.

“It completely negates the concept of brand loyalty,” he said.

Technology and innovation will give consumers more control and choices over that process over the next ten years, not less, putting brand loyalty at risk, if not out of business altogether.

The real culprit, said Razorfish’s Adamski, is choice and the fact that consumers now have access to better information to make their choices from a “trusted network of peers” -- both word of mouth and via online reviews and social commentary” -- than ever before.

Contagious’ Sansom said this is giving rise to a phenomenon dubbed “considered consumption” which is replacing the intangible values historically communicated by brands.

Razorfish’s Adamski said that digital media -- especially the application of Big Data -- in the near-term has been contributing to the decline of brand loyalty, not helping it, because “brands are not treating us as individuals. For far too long, brands are still relying on archaic -- and quite frankly, flawed -- segmentation processes that market to demographics. But they don’t market to me.”

That said, he said the meaningful application of data is the very same thing that will help brands understand who their consumers are and how they can best fulfil them -- once they get it right.

“The reality is, data is how we listen to our customers. So if we’re not using data, we are in essence ignoring our customers,” he said.

The second provocation on their list was one that some of Madison Avenue’s -- and Cannes’ -- digerati might find counterintuitive: that brands and agencies need to find ways of connecting with consumers outside of screens and with genuine human experiences.

Citing estimates that roughly half the world’s population will remain “unconnected” for the foreseeable future, Sansom said the ad industry must start focusing on people who have and will “grow up without screens.”

“Great brand experiences will liberate us from screens,” he asserted, adding, “Now ‘liberate’ might feel like a dramatic word to you sitting here, but we firmly believe that despite the Internet having opened up our world in really, really wonderful ways… we are paradoxically imprisoned by our screens.”

He said their is a “fundamental misconception that the Internet has to be screen-based. And that it wil always be screen-based,” and then gave examples of how and why brands should begin thinking beyond screens.

The final provocation of the session was one that got the Cannes crowd most animated when the duo presented it: “In ten year’s time, your agency will be an algorithm.”

Sansom observed that he could hear “cackling and sharp intake[s] of breath.” from the audience, but went on to say that advertising, like any other industry is all about “efficiency: Making things better, faster, cheaper.”

“Are we ever going to get to the point where an algorithm could create a credible piece of advertising from start to finish by itself?,” asked Sansom, adding, “Imagine dealing with a creative director who is an algorithm? He literally knows all the answers.”

Although it wasn’t an official provocation on their list, the provocative duo wrapped up with a prediction that, in some ways, represents the most fundamental shift of all for the advertising industry. In the next ten years, said Sansom, the industry will shift from “seducing people into thinking they need to buy a specific product or service into directly fulfilling their exact needs.” 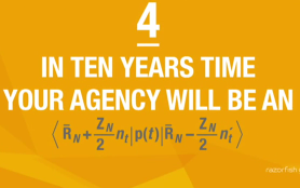