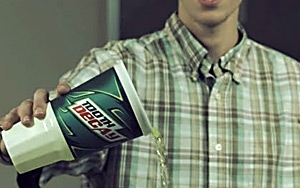 For the second time, veteran advertising executive Alex Bogusky is helping the nonprofit consumer advocate group Center for Science in the Public Interest take on the big soda companies.

CSPI has released a video parody Coca-Cola's iconic 44-year-old "Hilltop" ad, called "Change the Tune." "Hilltop" has experienced a resurgence of awareness and popularity via its pivotal role in the final episode of "Mad Men," although CPSI reported that the parody video's timing was just a lucky coincidence for the organization.

The video was created by the Lumenati agency, in which Bogusky is an investor, and he was the executive creative director on this video — as he also was for a 2012 CSPI video ("The Real Bears") that parodied Coke's polar bear characters. Bogusky was formerly co-chairman of Crispin Porter + Bogusky, and numbered Coca-Cola among his clients for a time.

The "Hilltop" video parody starts with a screen message: "In 1971, Coca-Cola taught the world to sing with their original 'Hilltop' ad."

A man and two women, with the help of a background chorus, are each shown singing the famous "I'd Like to Teach the World to Sing (In Perfect Harmony)," at first using the song's real lyrics.

Then, after a second screen message — "44 years later, the world is singing a different tune about sugary drinks" — the singers are revealed, via their hospital backdrop, a syringe injection scene and screen captions, to be suffering from ailments including Type 2 diabetes, hypertension and "soda-related obesity."

The lyrics also take a decidedly different tack, starting with: "I'd like to buy the world a drink that doesn't cause disease."

As it continues, the afflicted are shown dumping out their supersized cups of soda. The cups bear "logos" — actually the words "diabetes," "obesity" and "tooth decay" — that mimic those of Coke, Pepsi and Mountain Dew (screen grab above).

The visuals are intercut with more screen messages, including "Beverage companies spend about $1 billion per year advertising sugary drinks," and "Sugary drinks are the single largest source of calories in the American diet."

“For the past 45 years, Coca-Cola and other makers of sugar drinks have used the most sophisticated and manipulative advertising techniques to convince children and adults alike that a disease-promoting drink will make them feel warm and fuzzy inside,” said CSPI executive director Michael F. Jacobson, in announcing the video's release. “It’s a multi-billion-dollar brainwashing campaign designed to distract us away from our diabetes with happy thoughts. We thought it was time to change the tune.”