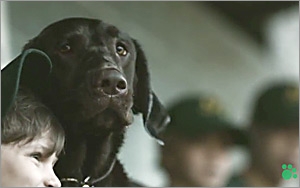 Iams is focusing on the emotional connection between dog owners and their pets in a long-form film that is part of a larger effort.

The campaign is the first work from DDB New York for the brand since being named agency of record in September. It’s also the first campaign from Iams since becoming part of Mars Petcare in August 2014.

“Through the Mars Petcare transition, Iams has maintained its heritage and dedication to being a key component to helping enhance dogs’ health at every life stage,” says Dan Jackson, marketing director, Mars Petcare.

The effort includes digital, social, print and PR executions highlighting the special family bond between dogs and their owners. Fans can find the video online, as well as www.facebook.com/Iams or twitter.com/IAMS.

The new creative will guide every aspect of the brand’s communications.

The 75-second film, entitled “Duck,” which is the name of the dog, shows the connection between a boy and his dog growing up together. The spot reveals the heartwarming story of how the dog got his name and also highlights the role Iams food plays in keeping dogs healthy and active throughout life.

“Launching the ‘Duck’ campaign is a reminder to all consumers that Iams is here to provide your dog with a healthy life for all of the milestone moments,” Jackson tells Marketing Daily.

The new work comes nearly two decades after the brand released its historic “Casey” campaign, which highlighted the lifelong story of a girl and her dog. The spot was the strongest-performing TV creative in the brand's history.

The ads will run well into 2016, Jackson says. The long-form film has also been edited to 15- and 30-second versions.