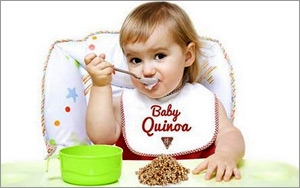 Yes, Gwyneth Paltrow named her baby Apple. But will non-celebrity parents be willing to name their child Quinoa for a chance to win $10,000 worth of meals at a casual restaurant chain?

Don't bet against it. Last May, Bon Appetit reported that there were 336 babies named Kale (325 of them boys) in the U.S., among other offbeat, food-inspired monikers recorded by the Social Security Administration.

But there don't appear to be any Quinoas as yet — a lucky break for BJ's Restaurant & Brewhouse, which dreamed up the stunt as a means of promoting its new Quinoa Bowls.

The winner will be the entrant with the first baby born or adopted between June 22 and Sept. 7 of this year, and named Quinoa (official first name, not used as a middle or nickname). A birth certificate must be submitted as proof by Oct. 21. Entrants must be adult residents of one of the 20 states in which parent company BJ's Restaurants, Inc. has locations under four brand names.

"We are so excited to introduce these amazing new Quinoa Bowls that we wanted to do something big, maybe even a little crazy," said BJ's EVP and CMO, Kevin Mayer.

Maybe not so crazy: As one BJ's Facebook fan wryly observed, "Trust me, parents will do this without the promise of free food!"

BJ's followers who aren't expecting — or are for some reason hesitant to name their kid Quinoa — can still get a coupon good for $10 off a $35 purchase by changing their own first names to Quinoa on Twitter between now and July 6.

1 comment about "Will Parents Name Babies 'Quinoa' For $10K In Restaurant Gift Cards?".
Check to receive email when comments are posted.
Next story loading