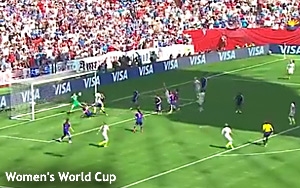 The U.S. women triumphed over Japan to win the 2015 World Cup Tournament on July 5th, and Americans celebrated by taking to Twitter, according to Amobee Brand Intelligence.

Nike was the most high-profile brand during the tournament. Nike -- which served as the official sponsor for the U.S. women’s team -- received 121% more mentions via digital channels than official World Cup sponsor Adidas.

These two athletic brands were both highly visible throughout the tournament. Adidas had its name on the game ball, while Nike outfitted 11 teams during the tournament compared to six for Adidas.

Ultimately, however, Nike's support of the winning team and its active social media #NoMaybes campaign helped to elevate its online visibility past other brands and sponsors, says Amobee.

In comparison, Chevrolet -- which was also an official sponsor of the U.S. woman’s team -- had 17% as much World Cup associated digital consumption when compared to Nike. Official FIFA sponsor Coca-Cola attracted only 16% as many World Cup mentions associated with digital consumption, and official FIFA sponsor Visa received just 13% as much compared to Nike during the tournament.

Abby Wambach and Hope Solo may have been the best-known athletes going into the tournament, but Carli Lloyd was the hottest athlete during the final match. Lloyd, who scored a goal with a kick near midfield in the final, attracted 120,951 Tweets in the six-hour post-game period.

In comparison to the MLB All-Star selections, which were announced on the same day, Lloyd was 201% more visible across 600,000 Web sites and social media than all 30 MLB teams combined.

"The fact that there was 104% more digital consumption around Carli Lloyd on July 5 than around LeBron James, Tiger Woods, and every single MLB baseball team combined illustrates just how much her historic performance resonated with the online audience.”

Carli Lloyd, added Kamon, “had a moment that much like Brandi Chastain in 1999, people are going to remember for decades, and the faster brands are able to leverage that; the more associated they’re be to the accomplishment of the iconic athlete."

Here is a ranking of which brands had the most associated digital consumption related to the event between June 6 and July 5, 2015, as tracked by Amobee: