Walk Like An Egyptian: Spike's 'Tut' Struts His Stuff 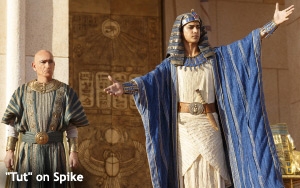 He’s Tutankhamun – “Tut” for short” – the boy pharaoh of archaeological legend who comes to life in a new six-part miniseries called “Tut,” airing on cable’s Spike for three nights starting on Sunday (July 19).

The real Tut became a star after his treasure-filled tomb was discovered in 1922 and became an international sensation. Ever since, Tut has captured our imagination – turning up in some of the most ludicrous situations, from an arch-criminal named King Tut in the 1960s on “Batman” (played so memorably by Victor Buono) to the subject of a hit novelty song performed by Steve Martin in the 1970s.

As a result, it can be difficult to take Tut seriously, although this Spike miniseries – a sword-and-sandals drama in the old-fashioned vein – tries mightily to make you do so. It should be mentioned that “Tut” is the most lavish scripted miniseries ever produced by and for Spike (in fact, it might be the first and only one, too).

In “Tut,” we find the teen Tut growing into young manhood and attempting to assert his leadership in the treacherous Egyptian king’s court whose members include a veteran vizier played by Ben Kingsley (who is always referred to augustly in p.r. materials as “Oscar winner Sir Ben Kingsley”) and the leader of the Egyptian army, Gen. Horemheb. He’s played by burly Nonso Anozie, who is also seen this summer in “Zoo” on CBS and also appeared in “Game of Thrones.”

Also starring in “Tut”: Sibylla Deen, who plays Tut’s sister and wife – an incestuous marriage ordained by Tut’s late father who believed their union would produce a male heir and continue the family line of pharaohs. Deen is also in another Middle Eastern drama on TV this summer, “Tyrant” on FX.

In the Spike miniseries, the edges of the Egyptian empire are being threatened by its neighbors who are pillaging Egypt’s border villages and doing all sorts of cruel things to the defenseless women and children living there. Moreover, famine has devastated crop yields, causing commoners to resist paying taxes or tribute since they have neither goods nor money.

Ensconced in his royal compound in the ancient Egyptian capital of Thebes, young Tut knows little about the hardships ordinary people in his kingdom are grappling with, so he ventures out secretly to see how the other half lives. It’s doubtful this part of the Tut story was discernible in hieroglyphics inscribed on the wall of his tomb, but it’s safe to assume that a great deal of license was taken in the writing and conception of this “Tut” miniseries.

In fact, except for the boy king’s age, the entire thing is probably one big fiction. It’s also one big hoot. I found it easy to scoff at “Tut” at the outset of the first installment – which I watched on a preview DVD courtesy of Spike. But I wound up so enthralled that I watched the entire 90 minutes.