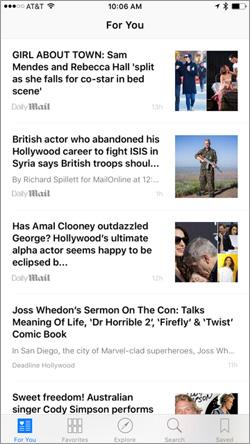 As is its wont, the Interwebs set their hair on fire when Apple announced that it was getting into the news curation game in iOS 9. The upcoming update adds a News app that will pull in everything from major brand media to blogs, in a manner that is familiar to any Flipboard, Zite or News Republic user. Of course, in this case, the aggregator is Apple, and its app will be baked into the OS.

Just add another log onto the platform world conspiracy fire, goes the narrative. On the heels of Facebook’s Instant Articles, Apple too was trying to become the new host and gatekeeper of major media content. The legitimate worry of course is that media brands further lose control of their audience, data, context -- and potentially, of their advertisers. I would say “Alert the media,” but in this scenario the media are already dead men walking.

All of this may be true -- but the jury is still out on whether gorillas like Apple, Facebook and Google are any good at curating news. After a lot of bravado, Facebook’s Instant Articles was off to a slow start, with few updates to the enhanced articles that publishers were letting the social network host on its mobile app.

Both Facebook and Apple are offering publishers tools to make their branded media look and feel more attractive when they sit within these hosted environments. But they require additional effort from an already overtaxed publisher workflow. In the case of Instant Articles, there were few examples of enhanced content on the platform after the launch day samples. Publishers will need to think long and hard before investing much time in making their content look compelling on someone else’s platforms.

As for the new Apple News, the public release of the iOS 9 beta on Friday gives us a first peek. It is unfair to come to any conclusions on the strength of a beta release, of course. But so far, it's clear that Flipboard and other aggregator rivals shouldn’t panic and run for their exit strategies anytime soon. Apple has not cracked any special news code here. The News app looks and feels much like the major, and already decent, aggregation apps. Much like Flipboard, it lets you tag favorite media brands, with a heavy emphasis on the lush magazine titles and major newspapers. Also, it pulls in multiple sources when you subscribe to specific topics (Politics, celebrities, tech, etc.).

As in its new Music app, Apple is trying to distinguish itself by claiming it is run by human editors, not algorithms -- and in both design and story choice I will say that Apple News feels less robotic than others. The design mixes up headline and image sizes as well as the blocking of the items. There seemed to be less redundancy among the stories. It is still prone to weird tech errors like truncated stories.

When the RSS feed allows for full text and images to be pulled into the app, the formatting is quite pleasant: legible clean text scroll and embedded visuals in a layout with a lot of white space. Scroll to the end and the in-app view pulls in the original Web page, including its ad clutter. For Apple’s part, the ads are in-feed display units of varying sizes that cleanly span across the screen girth on both tablet and phone.

The Apple News experience is pleasant, but there is no need to stop the presses over this one. It will be interesting to see if it succeeds in luring newshounds away from solutions most of them already use. I am a Zite man myself, mainly because I am used to the interface and the rhythms of dancing across my favorite topical sections.

Do I recognize that any news algorithm is better here than in Flipboard, which also has a human-edited daily digest, or Zite or News Republic? I doubt it. Will it make a difference that Apple News is using a full editorial team? I'm not sure. Perhaps these differences are too subtle to affect our app choice.  I don’t know. This is new territory for all of us. I'm not convinced that media consumers have a lot of loyalty to many media brands anymore, let alone to an aggregator that has no specific editorial voice or identity. Welcome to the new face of media blandness.

This column was previously published in Mobile Marketing Daily on July 13, 2015.