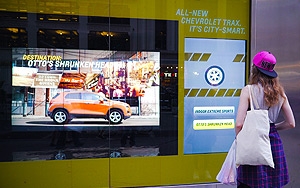 Chevrolet has partnered with digital out of home pioneer Pearl Media for a street-level experiential program in Los Angeles, New York and Chicago. The digital interactive theater is part of automaker’s urban-centric, Millennial-focused program to promote its hot selling compact crossover, Trax. The effort, which carries the umbrella campaign’s “Hidden Gems” idea, examines the lesser known virtues of street culture the three cities.

The experience comprises a 165-inch video wall and interactive touchscreen that, per the automaker, is programmed to encourage passers-by to stop and learn about things like where locals go to eat good food, find non-stodgy art, and uncover music events and happening spaces.

The idea is that Trax is the right vehicle for the urban experience, a key element of the Chevrolet campaign for the car, a grass-roots centric pitch that has involved a big social media component powered by influencers. This year the company took a fleet of Trax vehicles to the three cities, where influencers chosen by their pursuits and their social following, took urban road trips around the cities, hitting various “hidden gems,” spots that wouldn't show up on tourist top-ten lists, but which the grapevine has turned into booming Millennial magnets. The campaign had a secondary program: to tout Chevrolet's 4G LTE WiFi. The effort, via Chevy's agency, Commonwealth, included video vignettes of Millennials out and about in the Trax.

Trax, an import launched in the U.S. late last year, has been the beneficiary of Americans' huge appetite for crossovers this year, with June being especially big. The vehicle, with a quarter of the category's market-share pie, is sharing the top spot in small crossovers with stablemate Buick Encore. It is also big with Millennials, who make up about a fifth of its buyers.