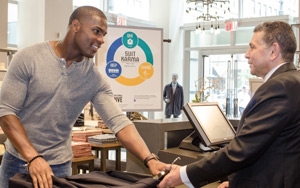 As they head into their most important selling season, big retailers -- including Men’s Wearhouse, Macy’s and Kohl’s -- are cranking up their cause-related commitments.

For its eighth annual National Suit Drive, Men’s Wearhouse has signed up Philadelphia Eagles star DeMarco Murray and the National Basketball Coaches Association (NBCA) in a social media campaign, urging shoppers to bring gently used professional attire in to its stores so it can be passed on to unemployed job-seekers.

Since its launch, the campaign has collected more than 850,000 of these donations, and hopes this season will push it past one million mark. And to generate further buzz, such NBA coaches including Lionel Hollins (Brooklyn Nets), Brad Stevens (Boston Celtics), Frank Vogel (Indiana Pacers), and Rick Carlisle (Dallas Mavericks) have promised to donate suits of their own.

Macy’s is hoping to tap back-to-school generosity for a handful of charities, introducing its first-ever Fashion Pass, which cost shoppers $5 and earns them discounts of 15 to 20% storewide, with all proceeds heading to Children’s Cancer Research Fund, Council of Fashion Designers of America Foundation, The Elizabeth Taylor AIDS Foundation, and Ronald McDonald House, as well as the Fashion Incubators at Macy’s. The effort is scheduled to run through mid-August, the heart of its back-to-school fashion season.

Kohl’s is also intensifying its cause-related marketing to sync with the season, and says its associates will participate in volunteer events geared toward children’s health at more than 160 hospitals around the country.

Associates from each of its 1,164 stores are participating in events that include car-safety inspection programs, dental health giveaways, and bike-helmet fittings. The Menominee Falls, Wisc.-based chain is also making $500,000 of grants to participating organizations.