It’s over a year away, but the 2016 Presidential election is already coming into focus for marketers. And with the upcoming election has come an increased focus on programmatic ad technologies, which have long promised efficiencies in targeting precise audiences -- exactly the type of thing political marketers aim to do.

To help paint a picture of how political marketers are using programmatic technology, video ad tech firm TubeMogul on Wednesday released its first report in a planned series meant to study inventory and other trends in programmatic political advertising.

“[W]e have already seen a considerable uptick in impressions on sites with political content,” wrote TubeMogul in a blog post displaying the findings. “[M]uch of the growth stems from early primary states -- Iowa, New Hampshire, South Carolina, and Nevada.”

Several ad tech firms are steeping up their political efforts, including Rubicon Project, which on Wednesday announced the opening of a new office in Washington, D.C. 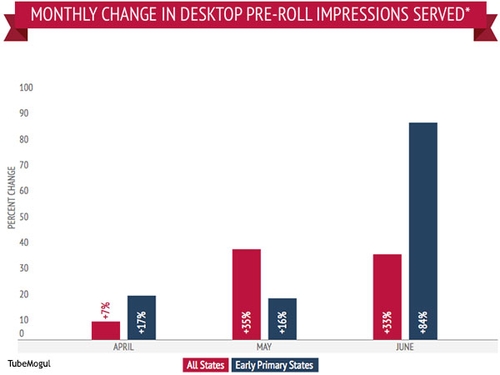