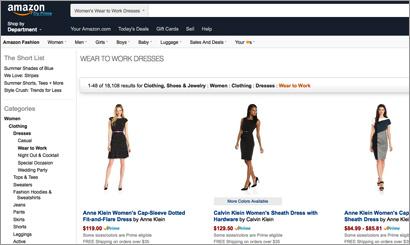 While threats of e-commerce wiping out local malls have been around almost as long as the Internet, they just became a whole lot more specific: A new report from Cowen and Co. reports that by 2017, it expects Amazon to take first place in U.S. apparel sales, passing Macy’s.

But Macy’s isn’t the only brand that should be worried. At a time when apparel sales are showing strong growth at Amazon (up 36% in the first half of this year, on top of a 28% gain last year) they have fallen 3% at Walmart and 2% at Target since the first quarter of 2014.

And while some brands such as Nike and Under Armour are likely to fare better in an apparel world dominated by Amazon, “middle of the mall retailers are most at risk,” writes John Blackledge, analyst, in his “Amazon: The Emperor Has A Large Wardrobe” report.

The report predicts that market share for Walmart and Target will remain flat from 2015 to 2020, even as its core customers are buying clothing more enthusiastically (up 8%) at Amazon.

And while other retailers are making inroads with omnichannel efforts, Amazon’s strengths — including first-party brand relationships, superior fulfillment and technology/imaging — are tough to beat.

But its real strength is selection, and that’s what makes Amazon the apparel world’s Godzilla.

“By our count, Amazon has about 19 million apparel-related SKUs, 1.2 million SKUs that qualify for Prime, and about 343,000 SKUs related to leading brands selling directly or on a first-party basis,” he writes. The mighty Walmart has just 292,000  apparel-related SKUs, with Nordstrom and Macy’s carrying just 85,000, and Target only 35,000.

While non-differentiated retailers may be at greatest risk, the report says that store experience still matters, and that stores that provide innovative product and category leadership, those that offer fun experiences, such as off-price treasure hunting, and those that are most skillful in their own bricks-to-clicks combinations will continue to do well.

Meanwhile, new research from the National Retail Federation shows that retailers are increasingly fighting back against the Amazon onslaught by dabbling in online retail marketplaces, when one retailer sells merchandise via another retailer’s site, as a way to get new customers. The State of Retailing Online 2015, conducted by the NRF’s Shop.org andForrester Research Inc., says merchants rate these marketplaces in fifth place for their effectiveness as a customer acquisition tool, and 32% more are increasing their budget for this marketing tactic than in last year’s survey. Retailers are devoting 16% of digital marketing budgets to marketplace initiatives, “second only to search engine marketing (33%), which is on par with search engine optimization, and just ahead of email marketing (14%).

“From Wal-Mart and Alibaba, to Sears and Macy’s — the collective world of e-commerce has integrated the use of marketplaces into their business and benefited from the increased customer traffic,” says Forrester VP and principal analyst Sucharita Mulpuru in its report. “For many retailers, using marketplaces gives them a new way to compete with Amazon — even if that means selling their products on Amazon itself.”

The big news, however, is that retailers are relying more heavily on social media, with 25% saying Facebook is the top acquisition platform. And 58% are increasing year-over-year spending on social media marketing, a gain second only to those spending more on search engine marketing (63%.)