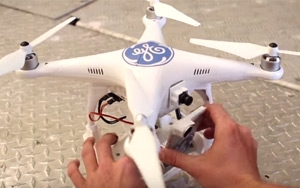 Now, GE and creative agency Barbarian Group have found a way to promote GE's various divisions through #DroneWeek. For five days in July, drones flew over and into five of GE’s most remote testing facilities to give audiences a never-before-seen look at the facilities where GE builds jet engines, locomotives, wind turbines and industrial machinery. Using the platform Periscope, the drone shows off a 47-acre site as well as views from the top of a wind turbine.

"Exploring different locations for #DroneWeek allowed GE to show a range of their advanced capabilities in just five days," says Kim Jimenez, senior media and distribution lead, Barbarian Group. "Further, they were able to tap into new audiences by using a new platform like Periscope and taking advantage of the popularity of drones. That paired with fans of the individual industries, brought together a major audience that's already asking for more."

The campaign was live on Periscope for five days, with over 30 streams released throughout the week. Working with production company Lot112, the initiative also released teaser content— photos and videos — to generate excitement around the launch across GE's global social media presence on Twitter, Facebook, Instagram, YouTube, and Tumblr.

Throughout the campaign, agency executives continued daily promotion on the channels and used the Periscope streams to create daily recap videos that provoked replay views on the app. An additional Periscope account (@GEDronePilot) that was able to field questions from the audience while the drone was in flight.

The Barbarian Group and Lot112  compiled all of the footage from the week -- including high-definition shots captured by an additional drone -- to produce a campaign recap video that highlights each of the five locations and airs across GE's YouTube, Facebook and Twitter. It remains to be seen if this video will be as popular as the initial live streams. Currently, this video on YouTube has attracted a mere 2,850 views.

That said, executives say they are pleased with the results.

"We learned a lot being one of the first brands to use Periscope to live stream from a drone. We wanted our content to be as organic to the platform as possible, but that still required us to run rounds of tests," says Jimenez. "We tested our flight paths, internet connection, video quality, audio, and more. When all was said in done, we had to be flexible in our approach and that paid off with plenty of happy viewers."

More drone films are being considered for the future.