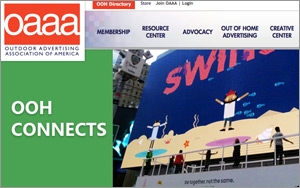 These figures mark the 21st consecutive quarter of year-over-year growth in OOH ad revenues. For the first six months of the year, total OOH expenditures increased 4.2% to $3.84 billion.

As noted above, over the last few years, out-of-home has managed to defy the downward trend affecting other traditional media, including newspapers and magazines, thanks in part to the rise of digital out-of-home displays.

Earlier this year, the OAAA released a study that tracked 1,837 smartphone users via a smartphone eDiary, recording various factors, including their location, media consumption, purchase activity and moods.

The results showed that OOH ads reached consumers in the hour prior to 43% of mobile shopping activity, ahead of other media like TV, radio and newspapers.