Television Noir And The Zen Of Perry Mason 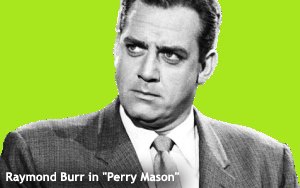 I last saw Yvonne Craig a week ago. She was 21 years old.

She died this past Monday, at age 78. It was purely a coincidence that an episode of “Perry Mason” in which she guest-starred in 1958 aired on the vintage TV channel known as MeTV last Friday, just days before her death.

Also guest-starring on the episode: Neil Hamilton, playing her stepfather. Nine years later, they would co-star again on “Batman.” He played Gotham City Police Commissioner James Gordon. She played his daughter, Barbara Gordon -- aka Batgirl, the role from way back in 1968 that made it into all the headlines about her death this week.

Coincidence or not, stumbling across Yvonne Craig and Neil Hamilton late on a Friday night is one of the joys of forming a regular “Perry Mason” habit. I am not necessarily a person who is prone to taking up a habit for old TV shows, but there’s something about “Perry Mason” that grabs me every night at 11:30 Eastern.

And I know what that “something” is too: It's the “Perry Mason” theme music. Composed by the late Fred Steiner, this music -- which plays as a judge hands Perry (Raymond Burr) a file of documents in a wood-paneled courtroom -- signals all you need to know about this extraordinary black-and-white TV series. This is hard-boiled 1950s television at its best -- television noir, if you will -- complete with murder, small-time crooks, duplicitous heirs and heiresses, unfaithful husbands and wives, and hard-edged femmes fatales of all kinds.

A “case” in point: The episode seen just this past Wednesday night titled “The Case of the Rolling Bones” (original airdate: June 28, 1958). One scene was particularly evocative of noir cinema. It had a con man's girlfriend belting down great mouthfuls of whiskey as she mourned the con man's murder, and between sobs, underwent questioning by this show's dogged homicide detective, Lt. Tragg (played by the great Ray Collins, one of the stars of “Citizen Kane”).

They faced each other in her drab apartment, the camera darting back and forth between them as he peppered her with questions, and she repeatedly poured fresh drinks into a tall glass, drained it, and then blurted out her answers. The scene was lit in such a way that that she (but not he) was shrouded in bar shadows cast by an unseen venetian blind, a common characteristic of noir films meant to symbolize a character’s “imprisonment” (or so said one of my college professors, the late Alfred Appel Jr.). The actress’ name was Joan Camden, and her performance was riveting.

The original “Perry Mason” ran on CBS for nine seasons -- 1957 to 1966 -- a total of 271 episodes. They seem to be running in order on MeTV. According to a complete list of “Perry Mason” episodes on Wikipedia (an invaluable resource for these kinds of lists), “The Case of the Rolling Bones” was the final episode of the show’s first season.

At the center of the show is Mason himself – a tough and cynical criminal defense attorney whose clients often appear unannounced at the door to his swank L.A. office. They always have an elaborate story to tell, and Perry the cynic rarely believes a word of it. He then sets about trying to uncover the real story they’re not telling him, with the assistance of his “confidential secretary,” Della Street, played by the incomparable Barbara Hale; and the private detective whose firm is right next door, Paul Drake (William Hopper), who might be the snappiest dresser of his era.

Each episode usually finds Mason in a face-off with district attorney Hamilton Burger (William Talman), who, for all we know, might be a fine attorney -- except that Mason seems to outsmart him and win acquittals for his clients every time they meet.

From the mid-century décor and Paul Drake’s jackets to the vintage cars (Perry’s black 1958 Cadillac alone is worth tuning in for), sordid stories and black-and-white cinematography, “Perry Mason” is a show that hipsters -- and a lot of other people too -- ought to be watching at 11:30.

“Perry Mason” airs Monday through Friday at 11:30 Eastern on MeTV.

tv
6 comments about "Television Noir And The Zen Of Perry Mason ".
Check to receive email when comments are posted.
Read more comments >
Next story loading