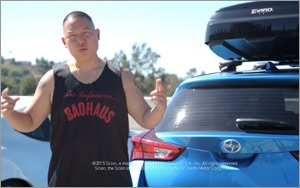 Eddie Huang gets free reign in the video he made for Scion. That alone makes this new digital campaign from the Toyota division directed at younger consumers a kind of anti-campaign, as these kinds of influencers-drinking-coffee-in-cars campaigns typically feel scripted.

In this one, after Huang says that if were going to eat Korean BBQ and Chinese hot pot, “and get real stinky, I'd probably go in a Scion iM. It's a great smelling car; I feel like it's built to inhale disgusting smells.” There's even an ersatz callout to Taco Bell. “I eat a lot of Taco Bell, so I have to do a lot of fitness,” he says after he picks up his trainer to go play hoops, golf, and tennis.

The campaign has Scion partnering with up-and-comers in various lifestyle categories to pitch the brand to Millennials. Front and center are the new iA sports sedan and above-mentioned iM 5-door hatchback, which roll into the market this fall. The digital influencer campaign involves five partners, each of whom is creating videos showing how Scion helps them do their lives.

Beyond the videos, the artists will do things like develop exclusive merchandise; provide concert tickets; and participate in special events. Huang made an appearance at the New York Auto Show this year on Scion’s behalf.

Doug Murtha, group VP of Scion, tells Marketing Daily that a key objective is authenticity. “We have established over time that working with people ‘off the radar,’ in an in-depth way creates authenticity.” He adds that an un-edited and improvisational approach to creative is mandatory. “We have an audience who can sniff through stuff that comes across as scripted.”

The automaker, which in June parted ways with long-time agency San Francisco-based Attik, reached out to Irvine, Calif.-based agency Beyond Marketing for the program. Murtha says Scion has deliberately diversified its partnerships with influencers and artists, programs that had been focused mostly on music. “We are trying to appeal to a broader audience, while also limiting the partnerships we embark on. We look for people who cross categories, too.” Huang, for instance, is a polymath, who is in the food space, but also has rap connections, and writes for TV. “He has a lot of different irons in the fire.”

The campaign for the iA and iM will expand next month to include TV and in-cinema ads. Murtha points out that TV has become more important in recent years for the traditionally grass-roots-centric automaker, an effort to grow awareness. “A few years back we took stock of the brand; we were nine years in and awareness wasn't where we wanted it to be. We haven't stopped grass roots, but we did need to place a bigger bet in higher visibility.”