Send In The Sloths: Costa Rica Touts Its Wildlife To Lure Tourists 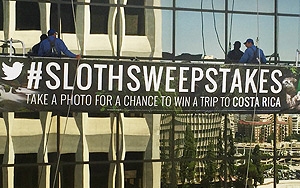 Last year, the Costa Rica Tourism Board and its agency 22squared launched the "Save the Americans" campaign to convey the message that Americans in Canada and the U.S. are overworked and under-vacationed, and Costa Rica is the solution for their vacation deprivation.

Now this campaign is taking to the streets. The concept brings Costa Rica to Los Angeles by using window washers and their suspended platforms to deliver messages with the campaign’s spokesperson, the sloth.

"Since there’s a heavy portion of our target audience in L.A., and there are direct flights to Costa Rica, L.A. seemed like a perfect fit," says Curt Mueller, SVP, group creative director, at 22squared. “Our mission is simple: Use Costa Rican animals, like the sloth, to convince overworked Americans to come to Costa Rica for a much-needed vacation. So, with ‘Save the Americans’, we’ve challenged ourselves to find innovative ways and new places to reach these Americans. We’ve reached them through music videos, a Twitter campaign called ‘Endangered Tweets’, sand sculptures near Wall Street in New York City, and now, in office buildings in downtown LA.

The campaign appears on 3333 Wilshire Blvd, a 13-story office building, as well as on the ground surrounding the building. Messages include “Attention Tenants: We will be washing the windows today. Watch for sloths” and “Staring out the window during work isn’t productive. That will change tomorrow.”

In addition, window washer's suspended platforms showcase the sloth mascot along with the message: “Cubicle. Cage. What’s the difference?”

Those walking by these images are invited to take a photo and share it using the  #SlothSweepstakes hashtag for a chance to win a trip to Costa Rica. Finally, on Aug. 25, the campaign will release a video showcasing office workers' reactions to a sloth showing up on their windows, as well as their moments when they enter to win a trip to Costa Rica.

While it remains too early to tell if this campaign will actually translate into increased visitors, previous Save the Americans initiatives have been effective. Costa Rica spent $3.3 million on its Save The Americans campaign last year and Tourism Ministry officials say that revenues from Costa Rica’s travel sector last year totaled $2.6 billion in 2014, an 8.3% increase over the $2.4 billion registered in 2013.

22squared has been working with The Costa Rica Tourism board for five years.