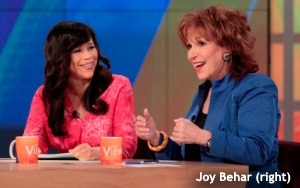 “The View” might need to purchase wide-angle lenses for its cameras to accommodate its newly crowded co-hosts’ table.

Joy Behar was the principal headline-maker on ABC’s announcement on Tuesday that “The View” is being remade yet-again. Behar’s return was just part of the story. Another was the fact that the lineup of co-hosts will now balloon to six participants when the show returns for its nineteenth season on Sept. 8.

With a half-dozen co-hosts seated at the table, “The View” will go one better than the other all-female talk shows on the air -- most notably “The Talk” and “The Real,” each with five co-hosts.

Behar, 72, was a “View” co-host since the show began in 1997 until she decided to hang it up in 2013. She lasted 16 seasons on the show -- one less than Barbara Walters, the co-creator of the show (with Bill Geddie) who was a co-host for 17 seasons. When Behar left, it was rumored that she was seeking a show of her own, after moonlighting with her own prime-time talk show on HLN and then on the channel formerly known as Current (her Current show ended in September 2013).

Her decision to accept an offer to return to “The View” is likely an indication that her plan to go solo didn’t quite work out. So now she’s back on the “View” panel at a time when the 2016 presidential race is already hot, and due to get hotter next year.

Behar’s an outspoken liberal, of course, so it’s probably hoped that she will lock horns occasionally with another one of the show’s new hires, Candace Cameron-Bure, 39, a former child star of “Full House” who blogs about her Christian faith. In that way, Cameron-Bure appears to be the replacement for Elisabeth Hasselbeck, who also left “The View” in 2013.

The other new hire is Paula Faris, 39, a reporter for ABC News. Behar, Faris and Cameron-Bure will join Whoopi Goldberg, 59 (according to Wikipedia), comedian Michelle Collins, 34, and another former child star, Raven-Symoné, 29.

Barbara Walters herself doesn’t seem poised for a return to “The View," but she issued a prepared statement that was part of ABC’s announcement on Tuesday. As a matter of fact, it was the second paragraph of the press release. “As ‘The View’ embarks on a remarkable 19th season, I am extremely proud to see the legacy of smart and diverse women engaging in entertaining and thought-provoking conversation continue,” said Walters, 85.

Not only does “The View” intend to seat six personalities at its table (in fact, maybe they’ll be investing in a bigger table too), but the show has lined up an array of contributors who will cycle in and out of the show as well. These include Padma Lakshmi of Bravo’s “Top Chef,” TLC style maven Stacy London, actress and model Molly Sims, CNN political commentator Ana Novarro and Sherri Shepherd, who was once a full-time “View” co-host.

The goal of this latest revamp would seem to be to steady the ship, so to speak, after a season of turmoil. A year ago, the eighteenth season began with a group of four co-hosts -- Goldberg, Rosie Perez, Nicolle Wallace and Rosie O’Donnell. The latter three, representing 75 percent of the show’s on-air talent, are all gone now -- which might make this new revamp the most comprehensive in the show’s history.

tv
7 comments about "Table Gets Crowded As 'The View' Sets New Lineup Of Co-Hosts".
Check to receive email when comments are posted.
Read more comments >
Next story loading