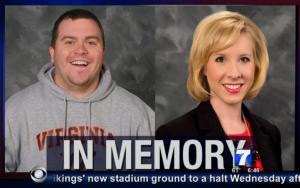 Local television stations in places like Roanoke, Va. are such integral parts of their communities that residents there are mourning the deaths of Alison Parker and Adam Ward as if they were members of their own families.

Those of us who don’t live anywhere near there feel a little bit like that too. Parker and Ward were just 24 and 27, respectively. They were just starting out in their lives. They had good jobs, were each engaged to co-workers and were probably looking forward to having families -- right up until the moment another nut with access to firearms decided he would kill them.

The fact that this crime took place during a live broadcast and was also filmed by the shooter for the purpose of promoting himself on social media gave the story a new sickening twist and a new angle on today’s media for pundits to explore in the murders’ aftermath. What was the killer’s main motive? Revenge? Fame? Both? Is access to social media too easy for someone who is deranged and seeks the thrill of instant notoriety?

It’s been widely reported that the shooter, Vester Flanagan (aka Bryce Williams), posted the video after the deed was done. But details on when, where and how he did this have not been reported yet.

So you’re left to wonder: Did he do it moments after he jumped in his car, or perhaps while he was driving, with one hand on the wheel and the other swiping away at an iPhone with the thumb of his free hand? He typed out a few tweets too. Did he pull over to the side of the road for this purpose or just continue driving? However he accomplished it, it was easy to do, and the video posted for all to see, at least until it was taken down.

Certain regions of the Internet sometimes seem too easily designed for these kinds of nefarious purposes. By contrast, consider local television. WDBJ-TV, where Alison and Adam worked, is the CBS affiliate in the Roanoke-Lynchburg, Va., broadcast market. It is the country’s 67th-ranked DMA (designated market area), with an estimated 441,140 TV households. The market has stations affiliated with the other four networks too -- NBC, ABC, Fox, CW -- plus a public TV station, WBRA-TV (Blue Ridge Public TV).

When Parker and Ward were killed, they were in the midst of doing a soft feature on local tourism, interviewing a local Chamber of Commerce official, Vicki Gardner (who was wounded and survived), on a sunny summer morning. The morning show they worked for is called, simply, “Mornin’ ” -- perhaps reflecting the cordial way folks around there greet each other at the start of each day.

When the shots rang out and Alison Parker screamed and the camera that was capturing this remote interview seemed to suddenly fall to the ground, anchor Kimberly McBroom was understandably surprised. But she kept a cool head and jumped to no conclusions. “OK, not sure what happened there,” she said. “We will, of course, let you know as soon as we find out what those sounds were from.”

She behaved professionally and responsibly, something we take for granted with our TV newspeople no matter where we encounter them -- whether on local TV stations in smaller markets or on our national networks.

And she was back on the air the next morning, reporting on the worst story she probably ever had to report. Among other things, she and her colleagues asked for a moment of silence during the morning show on Thursday, while an image of Alison Parker and Adam Ward was shown (it’s the screen grab, above).

In the aftermath of the murders, residents of the community, as well as people from all over the world, came together to express sympathies and condolences on social media -- the flip side of the purpose it served for Vester Flanagan.

“My prayers and condolences to the family and friends of Alison and Adam,” one person wrote. “The WDBJ7 crew has done a wonderful job of reporting and of helping us to know these two young people. My heart goes out to all of you.”