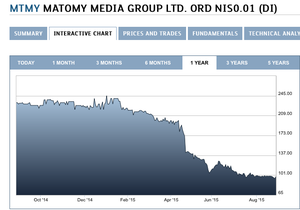 Matomy, a supply-side platform (SSP) which trades on the London Stock Exchange, on Friday released its first half 2015 earnings report. The company reported non-GAAP revenue of $125 million on the quarter with an adjusted non-GAAP gross profit of $34.2 million.

This is down from the same time period in 2014, when the company reported non-GAAP revenue of $129.1 million and adjusted non-GAAP gross profit of $37.4 million.

“The digital advertising industry is undergoing significant changes that are causing certain disruptions to different aspects of the marketplace. As such, we experienced a challenging first half of the year in the display business unit,” acknowledged Ofer Druker, CEO of Matomy, in a prepared statement.

Druker added that Matomy has completed its acquisition of MobFox, the mobile programmatic ad platform it acquired for $17.6 million last fall, and is in the “near-final stages of completion of the full integration with Avenlo,” the ad targeting and email marketing firm Matomy bought a majority stake (70%) in earlier this year.

Druker made it clear that the company is focusing on mobile, video and programmatic to right the ship, asserting that all three of those areas are growing year-over-year. He also claimed the company has seen “strong momentum since June.”

The post has been updated to reflect that shares of Matomy trade in pence, not dollars.