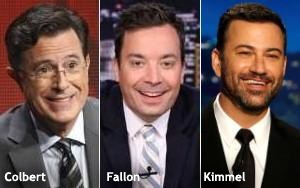 The booking wars are on.

No sooner did a press release arrive on Tuesday announcing that “The Tonight Show” had booked Donald Trump for next Friday’s show than another announcement came on the same day that Joe Biden would appear a day earlier on “The Late Show with Stephen Colbert” on CBS.

This particular “Late Show” guest spot, for Thursday, Sept. 10, was curiously unfilled when the Colbert show announced the guest list for its inaugural week back on Aug. 24.

It’s possible the Colbert show was already pursuing a Biden booking for that day so they left the slot open. Or they already had him nailed down and waited until an opportune moment -- such as the day the “Fallon” show would announce their Trump “get” -- to make their own announcement that they had booked a high-profile politico of their own for their first week of shows on CBS.

Whatever the circumstances, the jockeying for guests and publicity between these two New York-based late-night shows is on. And producers and bookers at both shows have come to the realization that politics is hot, so they’re in the hunt for presidential candidates -- whether announced and in full-campaign mode like Trump, or reportedly toying with the idea, like Biden.

The Colbert show might even be hoping for a Biden announcement next Thursday, although the odds of that happening would seem to be long. As for Trump’s appearance on “The Tonight Show Starring Jimmy Fallon” on the night after, anything can happen, especially this: Higher-than-usual ratings.

Meanwhile, Jeb Bush is already booked for Colbert’s first “Late Show” on Tuesday, Sept. 8 (along with George Clooney). Fallon had another candidate on this week -- Chris Christie -- who appeared on Monday. And the Colbert people will continue with their political guests in the new “Late Show’s” second week with Bernie Sanders booked for Friday, Sept. 18.

Tuesday’s dueling booking announcements from the “Fallon” and “Colbert” shows are all part of the late-night face-off that is set to begin next week on the day after Labor Day with the debut of “The Late Show with Stephen Colbert” on CBS. On that day, the late-night competition at 11:35 p.m. Eastern will be back up to its full complement of three network late-night shows -- a three-way race that has not been in place since David Letterman said farewell in May.

Also notable in the late-night competition this summer: Kimmel has grown a beard. It's not known whether he plans to shave it in time for the new competitive landscape next week (something he might be tempted to tape and post on YouTube under the title “Manscape For The New Landscape”).

What is known is this: No political candidates seem to be headed to the West Coast next week to appear on the “Kimmel” show. Instead, the Kimmel guest with the greatest potential for drawing the most attention will be Spencer Stone, the heroic U.S. airman who tackled a man armed with an AK-47 on a Belgian train, and in the process, probably prevented a terrorist massacre. Stone is booked for the “Kimmel” show on Tuesday, Sept. 8.

Other than Donald Trump, the only other guest booked for the “Fallon” show during Colbert's first week on CBS who might draw viewers to “The Tonight Show” in greater-than-normal numbers is Justin Timberlake, who is scheduled for Wednesday, Sept. 9, along with Ellen DeGeneres. Fallon and Timberlake are famous for their rap and singing duets, which make for videos that draw audiences online long after they have been shown on TV.

Guest bookings aside, it's in this arena -- what you might call “the late-night after-market” -- where the new generation of late-night headliners -- Fallon, 40, Kimmel, 47, and Colbert, 51 -- will also be competing fiercely.

We are already familiar with the YouTube success of Fallon’s celebrity lip-synch bits and all the games he plays with his guests, and Kimmel’s various video “Challenges,” in which he requests that his viewers withhold candy from their children on Halloween or turn a hose on dad on Father’s Day and videotape the results.

What will Colbert do? Well, he happens to be a hugely talented and multifaceted comedian, interviewer, actor and song-and-dance man. So the answer is: He can do anything he wants. Let the late-night wars begin.