Bring On The Political Commercials - And The Dirtier The Better 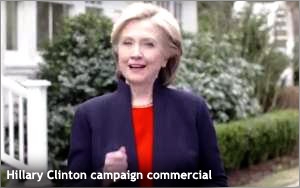 Local TV stations around the country are looking forward to a banner year in 2016, when spending on political advertising is expected to soar. As a big fan of political commercials, I say: Bring ’em on.

Various reports that came out late last month said political advertising on TV is already on track to break all previous election-year records. Spending on digital will grow too, the reports say, but not enough to exceed TV just yet.

Candidates and groups that support them have already booked $47 million worth of commercial time on local TV stations for next year -- “three times the amount at this time four years ago,” said one story in The Wall Street Journal on Aug. 25. In the months ahead, they will reserve millions upon millions more.

The presidential race that’s drawing so much attention and sucking up so much time on the cable news channels this summer will be only part of the political advertising picture next year. For those of us who follow political commercials and never tune away when they’re on, it’s the spots for local races -- seats in the House and Senate, gubernatorial campaigns, states’ attorneys general and the like -- that we love best.

I have heard that there are actually some people out there who abhor the political ads. They’re disdainful of them on several levels, including the sheer number of them, especially when they come to dominate local TV as Election Day draws near; and their mud-slinging contents, which, by their nature, leads to exaggerated statements and accusations and, in many cases, blatant misrepresentations of an opponent’s views and voting record.

However, I love them for these very reasons -- particularly the latter. The elements I look and listen for most in political commercials are these: The sinister narrator with a sneer in his (or her) voice; the carefully chosen, unflattering photo of the opponent, an image often grabbed from a piece of video at the moment when the opponent is frowning or grimacing; and a hoped-for exaggeration of the opponent’s record when it comes to various issues.

Thus, you get these great commercials in which the mean narrator says something like: “Bob McElroy [no offense to any real “Bob McElroys” -- I just made this name up] voted against necessary sewer repairs! He must be in favor of raw sewage backing up into your home! Say no to raw sewage! Vote for Mary Sunshine for State Senate!”

The commercial starts with an image of Bob McElroy frowning, followed by animated sewage being flung either on him or on the front of a white clapboard house with a picket fence. At the spot’s conclusion, a smiling Mary Sunshine is shown as she “approves this message.” Maybe she’ll even have an animated “sparkle” twinkling once or twice on her blouse or teeth -- a marked contrast from her sewage-splattered opponent.

It’s the no-holds-barred nature of this genre of advertising that has me so enthralled. Unlike the majority of other commercials we’re accustomed to, political commercials represent the one form of advertising where it’s OK to attack a competitor as viciously as you want.

If such an approach were adapted for the world of consumer-product advertising, you might have commercials in which Pepsi, for example, blatantly accused Coke of causing a nationwide obesity epidemic. “Coke wants your children to be overweight!” warns a nasty narrator, as a slightly out-of-focus image of a fat kid guzzling a Coke is shown.

“Coke doesn’t care about your kids!” the narrator continues. “Buy Pepsi!” The spot ends with a clear image of a thin, active child sipping a Pepsi between periods during a soccer game on a sunny day. Perhaps this active kid will even “approve” this message.

But that’s a fantasy. Advertising in the real world, even on those occasions when competitors take each other on specifically, never comes close to the tone of the political ads, which is why the political spots are so much more interesting. You find yourself wondering how extreme the new batch of political spots will be this time around and you usually find the answer pretty quickly: More extreme.

This too is a complaint you hear from those who don’t like the political spots -- that they’re so mean and inaccurate (if not dishonest) that they just make our political discourse – and, by extension, our society in general -- more coarse and ill-mannered than it has to be.

Another question might be: Are down-and-dirty political ads effective as advertising? For me, their value is incalculable as a form of nightly entertainment. As a factor in my decision-making when I’m at the polls actually voting, the effectiveness of these ads is approximately nil.

politics, tv
2 comments about "Bring On The Political Commercials - And The Dirtier The Better ".
Check to receive email when comments are posted.
Read more comments >
Next story loading