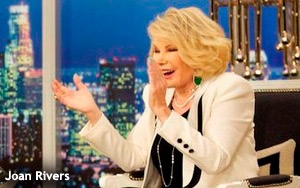 Surprise, surprise -- another one of my bold predictions didn’t come true.

I came out with this one last March in a blog post in which I declared that E!’s “Fashion Police” would never recover from the one-two punch of first, Joan Rivers’ death the previous September and months later, the sudden, bizarre exit of her replacement Kathy Griffin.

Griffin issued a statement when she left that said she couldn't stand to be on a show that trafficked in insults. This was from a woman who makes her living from insult comedy.

I wrote that it was more likely that she left because she had no chemistry with any of the other personalities on the show and she probably knew it, so she engineered her escape.

“End of story,” I wrote with customary bluster, “and in all likelihood, end of show too.”

Well, so much for my predictions. As with others I have issued over the years, this one did not come true. Incredibly, “Fashion Police” is still alive, having returned just this past Monday.

Melissa Rivers has taken over for her mother as the nominal “center” of the show, along with stalwarts Giuliana Rancic and Brad Goreski, who replaced George Kotsiopoulos when the show returned last winter following Joan Rivers’ death.

Kelly Osbourne left the show at around the same time as Griffin. Osbourne showed up Thursday night on “Project Runway” on Lifetime, as a guest judge. That same night, the “Fashion Police” crew was back on E! again with a half-hour clip special about Joan Rivers. The occasion was the one-year anniversary of Rivers’ death. She died a year ago today -- Sept. 4 -- in New York following a medical procedure on her throat.

The “Fashion Police” lineup of commentators was filled out on Monday by guests NeNe Leakes and Margaret Cho, and this, apparently, is the strategy the show is adopting going forward -- guest stars joining the three regulars.

What’s less certain is E!’s commitment to this show. According to a press release about the show’s return that E! issued early last month, plans call for only six episodes of “Fashion Police” at the moment.

They will not be airing weekly, but will be timed to coincide with various red-carpet events. The episode this past Monday aired on the day after the Video Music Awards on MTV. Upcoming episodes will focus on the Emmys (airing Sept. 20 on Fox), the American Music Awards (Nov. 22 on ABC) and New York Fashion Week (Sept. 10-17), the E! press release said. That makes four episodes accounted for. When the remaining two will turn up is anybody’s guess.

Anyone familiar with “Fashion Police” in the years when Joan Rivers held sway would probably agree she is irreplaceable. There was just something about the way she delivered her over-the-top statements about celebrities and their wardrobe choices that just worked -- no matter how profane or off-color or politically incorrect. Maybe it was because she herself was so flamboyant, and was long targeted by others for it -- from her costume jewelry and feather boas to her many plastic surgeries.

By most accounts, she was a tough cookie too -- energetic, hard-working and above all else, a survivor. Although her comic instincts are not likely to be replaced on “Fashion Police,” it’s likely her daughter inherited some of her survival instincts.

The best evidence of that is “Fashion Police” itself -- a show that, in the best tradition of show business, goes on.