After Weeks Of Headlines, It's Showtime For Colbert 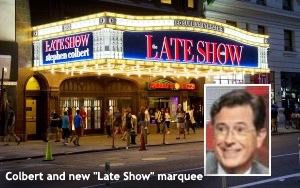 It’s a tribute to the staying power of “To Tell the Truth” that so many headline writers and Internet bloggers have adopted this old game show’s signature catchphrase for their Stephen Colbert stories.

“Will the real Stephen Colbert please stand up?” It’s amazing, isn’t it? More than half the people who wrote and posted this headline in the last few weeks probably have no idea where this phrase originated, nor have they ever likely laid eyes on “To Tell the Truth” in their entire lives.

This turn of phrase -- which has been so widely adapted for Colbert headlines and blog post ledes (go ahead and google it -- it’s all over the place) -- is meant to illustrate, and conform to, the prevailing narrative in the run-up to Colbert’s debut as host of the new “Late Show” on CBS on Tuesday night.

The question they’re really asking is whether Colbert can unzip himself from the “costume” he wore previously on “The Colbert Report,” where he played a pompous parody of a cable news talk-show host, to assume a new role as host of “The Late Show” on CBS. By implication, the question is also asking whether his many fans will accept him in some role other than the one they were long accustomed to.

Whatever the underlying question(s), the central assumption of all the stories is that the character he played on “The Colbert Report” was all an act, while the new role is not.

Well, I have some news for these commentators: Hosting a late-night show is an act. It might not seem so, particularly when you compare the late-night host role to a character like the one Colbert played on Comedy Central.

But it surely is an acting job. It requires that the host, to the best of his ability, remain in character and in the moment at all times. This particularly applies on days when the host might not be feeling well, or perhaps dealing with issues in his private life that would distract anyone in any occupation but cannot be allowed to intrude on the late-night host’s responsibility for projecting a sunny, fun-loving disposition.

Yes, I know that in a handful of very rare cases, these private-life intrusions have migrated to the on-air lives of late-night hosts from time to time. For example, David Letterman’s on-air revelation that he was the target of an extortion plot stemming from an affair with a staff member made for electrifying TV. And Jimmy Fallon shows up occasionally wearing various bandages and splints -- the results, apparently, of a series of household accidents. But most of the time, the private and public lives of TV personalities don’t mash up that way.

Fortunately for Colbert, he’s a trained actor, who is likely applying his actor’s training to the process of figuring out what his new role will be and how he ought to play it.

The commentators have been writing columns and blog posts suggesting that after 10 years in the role of the faux “Stephen Colbert” on “The Colbert Report,” this new job requires Colbert to “be himself.” Um, no it doesn’t.

It is true that the new Colbert has to come across as “real” -- or at the very least, more real -- than the two-dimensional cartoon character he used to play. But if anyone believes any of the late-night hosts are the same in their private lives as they appear on TV or that any of us are seeing the “real” person when we watch Fallon or Kimmel or Leno or any of the rest of them, then such people must also believe in the tooth fairy. Spoiler alert: there is no tooth fairy.

It has been my observation over the years -- something I have had to relearn again and again – that TV personalities off-camera are almost always not like the versions of them that you see on TV. News flash: You and I will never really know these people even if we watch them every night for years.

Which is not to suggest that Colbert doesn’t face a challenge when it comes to identifying the manner and style of the personality he should adopt as the host of “The Late Show.” He does face such a challenge, although the prediction here is that he’ll do just fine.

And here’s another prediction: That a number of the morning-after reviews of his debut Tuesday night will have headlines and/or lead sentences along the lines of: “The real Stephen Colbert stood up.”

However, no matter how well he does, it’s doubtful the “real” Colbert -- whoever that may be -- had anything to do with it.