Everyone In Media Should Watch This Four-Star Disney Documentary 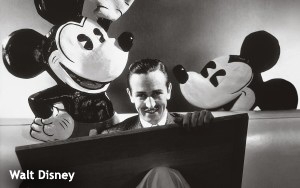 How many iconic companies are left that still bear the founder’s name?

Off the top of your head, you can think of just a handful -- Ford, Goodyear, Disney. In the entertainment realm -- an industry more widely referred to nowadays as “media” -- you think of Disney before you remember Warner, for example, which once stood for Warner Brothers, and still makes up part of the Time-Warner name.

But who remembers the individual Warner brothers? We all remember Walt Disney, though, even if we don’t remember his older brother Roy, who co-founded the company that bears their name.

As this new, thoroughly engrossing four-hour documentary about Walt Disney points out, the animation studio they founded in the 1920s was once called Disney Bros. until one day Walt announced that the company would henceforth be known as the Walt Disney Company.

But that was Walt Disney, a man so closely identified with his company and all of its renowned brands -- from Mickey Mouse to the Disney theme parks -- that he was like a latter-day Steve Jobs, only Apple never changed its name to the Steve Jobs Company.

One scene described in Part 1 of this “American Experience” documentary on Disney -- airing in two parts Monday and Tuesday night on PBS -- felt supremely Jobs-like. It was the time in the 1930s when a very excited Walt Disney called his employees into a company auditorium to announce his idea for producing a full-length animated movie, something that had never been attempted before.

In a now-infamous story that’s been told and retold (and possibly embellished) over the years, Disney took the stage and not only announced his idea but then proceeded to act out the entire movie, which later became “Snow White and the Seven Dwarfs.”

The story of the movie’s painstaking production -- complete with an element of suspense over whether it would be finished in time for its scheduled release in December 1937 -- forms the centerpiece of Part 1 of the documentary. “Snow White” was a triumph for Disney, not only because it was critically acclaimed and financially successful, but because hardly anyone other than Disney himself believed in the project -- a situation repeated time and time again in the Disney story.

The story of the “Snow White” movie has a fairytale quality to it, as do some of the other stories in Part 1, such as the creation of Mickey Mouse and the character’s almost instant fame, which saved the studio at a time when it was faltering and paved the way for Disney’s groundbreaking innovations in licensing and merchandising.

Part 1 of the documentary takes the Disney story up until spring 1941, when a strike by his animators would upend his company. While this turmoil brings Part 1 to a close with an air of uncertainty (not least because we all know World War II is coming), we also know that some of Disney’s greatest triumphs were still to come, including his conquest of television, the creation of Disneyland and “Mary Poppins.”

The Walt Disney story is more than enough to justify this documentary’s four-hour length. This is a very high-quality documentary, utterly fascinating from start to finish -- from the still pictures and vintage film clips (including examples of all of Disney’s earliest cartoons) to the interview subjects, who range from various biographers to Disney animators who are still living, including one, Bob Givens, who is now 97.

“American Experience: Walt Disney” is a four-star documentary that is not to be missed.

tv
2 comments about "Everyone In Media Should Watch This Four-Star Disney Documentary".
Check to receive email when comments are posted.
Read more comments >
Next story loading