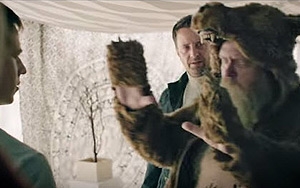 Quiznos is marking its first movie partnership — with 20th Century Fox's "Maze Runner: The Scorch Trials" — with a new parody video, along with a limited-time sandwich and a sweepstakes.

The video, a combined send-up of the movie and the Burning Man festival dubbed "The Burn Trials," has drawn nearly 1.4 million views on YouTube since its posting on Sept. 8. (According to USA Today, Burning Man's organizers are not amused, and are considering an intellectual property legal action against Quiznos.)

This is the latest offering from the QSR's Toasty.TV microsite, launched last year with the goal of increasing engagement with its core audience of Millennial males more cost-efficiently than traditional TV.  The entertainment site has pulled millions of views since its inception by offering curated content and original parody videos, created with the Windowseat agency.

Earlier Toasty.TV parodies have included mashups of "House of Cards" and "Game of Thrones" ("House of Thrones," posted on YouTube in March 2014) and "Star Wars" and "Entourage" ("StarTourage," posted April 2015 ), as well as a spoof of the first installment in "The Maze Runner" movie franchise, "The Waze Runner" (posted September 2014). On YouTube, those have drawn 2.4 million, 1.4 million and 944,000 views, respectively, to date. "The Waze Runner" also drew the (positive) attention of 20th Century Fox, and led to the current partnership.

Combined views of all of its parodies have exceeded 11 million, and, according to Quiznos VP of advertising and marketing Chris Ruszkowski, visits to the chain's online store locator have nearly doubled since Toast.TV's launch, with large jumps each time new original videos have been released.

The Fox page for "The Scorch Trials," to be in theaters Sept. 18, includes a link to Toasty.TV. The Quiznos parody video is also being promoted on the brand's social channels . Quiznos currently has about 1.3 million Facebook "likes," 75,400 Twitter followers and 4,900 Instagram followers.

The grand prize for the sweepstakes, also hosted on Toasty.TV, is a trip for two to the Hollywood premiere of a future 20th Century Fox movie.

The limited-time move tie-in sandwich is a toasted, spicy number dubbed the SatisFIRE.

Quiznos, founded in 1981, spent years in legal battles with its franchises, and emerged from bankruptcy last June.  In 2007, it had more than 5,000 locations around the world, but today, it's down to some 1,500 stores, 900 of which are in the U.S. All but about six are owned by franchisees, according to Forbes.

In the past year, the company, now controlled by private equity firms and hedge funds, has overhauled its supply chain and its  menu, implemented layoffs and named a new CEO, Doug Pendergast.

Pendergast told Forbes that the company is in the black. Quiznos did not disclose sales, but FRANdata, a franchise industry research firm, estimated the company's systemwide sales at $285 million in 2014, versus $400 million in 2013.