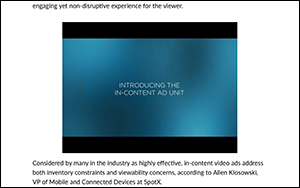 SpotX, a video supply-side platform (SSP), this week announced it has launched a new video ad unit it calls an “in-content” unit. As the name suggests, the unit can be placed inside of traditional content -- such as in between paragraphs of text.

This type of ad unit is also called “outstream” video advertising and has been championed by others in the video ad tech space, such as Teads.

SpotX says it is adding support for this particular type of unit to benefit publishers “with shortages of video inventory,” as the unit allows publishers to create space for video ads where it didn’t exist before. SpotX says the video will only play when in-view, thus guaranteeing viewability.

“Traditional print publishers, many of which offer premium brand placements for advertisers, are jumping at the opportunity to provide more video placements on their digital properties that are typically difficult to populate with enough video to support large pre-roll campaigns,” stated Allen Klosowski, VP of mobile and connected devices at SpotX.

SpotX’s “in-content” units can be sold via programmatic or on a direct-with-advertiser basis, per a release.