Middle Age Crisis: The Agony And The Anarchy Of 'The Bastard Executioner' 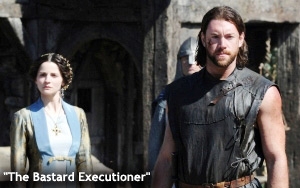 Things get pretty squishy in this new series titled “The Bastard Executioner” as great swords are plunged into torsos and various limbs are neatly sliced through, accompanied by various sound effects.

Uh-oh, you might be thinking as you watch and wait for a man to have his head lopped off in a public execution. I wonder how much of this they’re going to show? The answer comes soon enough: All of it. So that’s what a beheading really looks like! Thanks, “Bastard Executioner”! TV can be so educational …

Oh well -- with a title like “The Bastard Executioner,” one should expect an execution or two. And that’s not all. It turns out that the titular executioner’s actual profession is meting out punishment, of which executions are just one form. According to this show, a “punisher” of the Middle Ages was someone who owned a variety of tools with specific uses such as the tearing out of fingernails or the severing of noses.

“The Bastard Executioner” -- premiering Tuesday night on FX -- takes place in Wales at “the dawn of the 14th century,” according to the show. The title character is not only a bastard executioner (at some point, we learn that he knows not his father), but a reluctant one, sort of. In a plot set-up much too complicated to go into here, the title character -- real name Wilkin Brattle -- assumes the identity of a dead professional executioner/punisher so that he can infiltrate the inner circle of a local lord and take his revenge for the lord’s massacre of his family and fellow villagers.

As played by Lee Jones, Brattle seems as if he’s reluctant to lop off people’s heads, rip out their fingernails and cut off their noses (perhaps because he doesn’t want to spite their faces?). But you’re never quite sure, since he goes ahead and does these things anyway, despite any reservations he might harbor.

The ambiguities of this character might be purposeful on the part of the show’s creator and principal writer, Kurt Sutter, but they might also be due to the vague, expressionless way that Jones plays the character. You’re never really convinced that beneath his stolid exterior there lives a brain swimming with deep thoughts or firm convictions, although you get the feeling you’re supposed to assume this.

Unfortunately, much of “The Bastard Executioner” is just as unpersuasive. For example, the show’s setting, supposedly in the British Isles, is so sunny and warm that it feels more like southern California. Shouldn’t it be gray and rainy?

In addition, the show sometimes feels as if it wishes to be two things at once. One is a straight-ahead drama about the dreary and brutish existence of medieval peasants living lives of quiet desperation (and deprivation) while an arrogant lord demands tributes and taxes in such great amounts that it leaves them impoverished and makes them rebellious.

The other is a drama basically along these same lines, but with magic and mysticism. This aspect of “The Bastard Executioner” is embodied in a character known as “the healer” -- a witch-like figure played by Katey Sagal speaking in a hard-to-peg European accent. Sometimes it sounds like French, at other times it’s vaguely German and at still other times she sounds like Bela Lugosi in the original “Dracula.”

She’s accompanied by some sort of servant known as “the dark mute,” who is played by Sutter himself –-- an ironic bit of self-casting since Sutter played a character in “Sons of Anarchy,” the previous series he produced for FX, who bit off his own tongue. Sagal is Sutter’s wife, and she also starred in “Sons of Anarchy” as a motorcycle mama that was one of the great performances in the recent history of television.

tv
2 comments about "Middle Age Crisis: The Agony And The Anarchy Of 'The Bastard Executioner' ".
Check to receive email when comments are posted.
Read more comments >
Next story loading