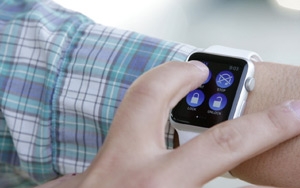 Ford has launched a suite of smartwatch apps linking to the company's telematics platform, MyFord. The apps, which Ford says are designed for its electric and plug-in hybrid cars like C-Max, are at the Apple App Store and Google Play, meaning the Ford products are good for both Android watches and Apple Watch.

The apps, which Ford says are designed to format to both round and rectangular screen formats, enable owners to do things like check their battery charge level, determine driving range before a trip, locate where their vehicle is parked, and unlock their doors from their wrist, according to the automaker. They also allow drivers to access their "driving score" (miles per gallon, trip miles, and braking and driving efficiency. As with Ford's visual template for efficiency driving, it uses leaves as a visual for green driving). The apps are the latest edition to a mobile app platform Ford set up three years ago -- MyFord Mobile.

In so many words, David Hatton, Ford manager for connected vehicles and services, said in a statement that the program means never having to ask “where’s my phone.” “The app gives drivers the ability to quickly check important data like available range before leaving on a journey." The app also notifies users when their car is fully charged, meaning that owners can get back to their cars before running up overage fees for charging.

In terms of the format designing, Ford says the rounded gauges match a round watch face like the one on Moto 360. Simply swipe up on the watch interface to quickly launch the app. Ford says the main app also offers a Google Maps feature with a pinch/zoom capability, that also lists nearby charging stations. The apps are intended to interface with the Ford C-MAX Energi, Ford Focus Electric and Ford Fusion Energi vehicles.

There are some other automakers with Apple Phone-friendly apps: Porsche, BMW and Hyundai. BMW was the first to show up on an Apple Watch, with its app actually debuting as part of the Apple Watch demo in last year. The BMW i Remote app is intended for owners of the automaker's plug-in version of the 3-Series, the i3, and for the i8 hybrid sportster. But you have to have BMW's connected car service, BMW Assist to use it. And there's Hyundai, which has been touting its own smartwatch app platform, BlueLink, which is not for Apple Watch.