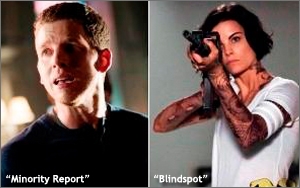 Apparently it's not -- at least for the creators of two new fanciful dramas premiering Monday night to officially kick off the new fall season. A new comedy starts Monday night too, but that one is not so complicated.

"Blindspot," 10 p.m. Eastern on NBC: In this new drama from NBC, a mysterious young woman crawls out of a duffel bag someone left in Times Square and she's completely naked.

No, she’s not one of the area's famed "desnudas' looking for suckers, er, tourists. She is covered head to toe in tattoos, however, which once upon a time would have made her unusual. Today? Not so much.

She is unlike a sideshow performer (or Brooklyn hipster) in other ways. She has no memory and has no idea how she came to be covered in these tattoos. Homeland Security becomes involved because one of her tats is the name of a swashbuckling FBI agent. So he's assigned to head up her case.

First order of business: Derail a terrorist attack on a New York landmark that would kill hundreds and destroy a symbol of freedom that is beloved around the world. The clues to this attack are etched on her body as well.

This was the point where I became repelled by "Blindspot." As a New York City resident, I have come to resent run-of-the-mill TV shows that dramatize the possibility of deadly terrorist attacks on New York City.

Watching a show that depicts attacks on landmarks and subways (the premiere of "Blindspot" includes a bomb planted on a subway train) is much too unsettling. Moreover, the use of these scenarios for entertainment purposes feels inappropriate.

However, I’m well aware that many movies and TV shows have trafficked in these scenarios ever since 9/11, so there must be an appetite for these storylines out there somewhere. I just don’t share in that appetite, unfortunately.

"Blindspot" also suffers from an inherent weakness that all such shows share, which is: It just doesn’t seem plausible (even in the context of a show whose very premise is implausible to begin with) that these scenarios can be set up and dealt with in the space of a 42-minute TV show. I guess I wasn’t buying into the fantasy world of "Blindspot." I predict it will get a lot of sampling, though, following “The Voice” on Monday night.

“Minority Report,” 9 p.m. Eastern on Fox: Speaking of farfetched scenarios, this TV adaptation of the 2003 Tom Cruise film of the same name is a hot mess. It’s about a small group of humans in 2040 who have precognitive abilities that allow them to foresee serious crimes such as murders in advance -- thus giving law enforcement an opportunity to prevent them, at least in theory.

The premise is science fiction, so it’s OK to suspend disbelief and accept the existence of these "pre-cogs," as they’re called in the show. But if “Minority Report” suffers from anything, it’s the same weakness as "Blindspot," which is that a one-hour TV episode is simply too confining for all of the action depicted on the show.

Some readers might be tempted here to conjure the memory of "24," that late, great terrorist-fighting series in which super-agent Jack Bauer accomplished quite a lot in a single hour each week. That was wholly implausible too, but that show was so well-made that you were too busy sitting on the edge of your seat and biting your fingernails to worry about issues of implausibility.

That’s not the case with "Minority Report." In the premiere of this show, the characters cover a lot of ground -- usually on the run -- and get timely assistance from a lot of fancy gadgets (basically elaborate databases -- accessible via touchscreens -- that do most of their investigative work for them).

But even though they’re involved in life-and-death situations, the characters seem oddly listless (particularly one law enforcement official played by Wilmer Valderrama). “Minority Report” is slotted after the season premiere of “Gotham” Monday night on Fox.

“Life in Pieces,” 8:30 p.m. Eastern on CBS: I am sure I won’t be the only critic out there who has concluded that this new one-camera family sitcom premiering Monday night is CBS’s answer to “Modern Family.”

In this show’s title, the key word is “pieces.” That’s the show’s gimmick: That it will be made up of individual segments, each covering a “piece” of this family -- all of which will be tied together in the end. At least, that’s what happens in Monday night’s premiere.

The episode has four parts, each dealing with, for example, a grown son and his dating life, a married son whose wife is seen having their first baby, and the older parents (a kooky mom and dad played by Dianne Wiest and James Brolin). It’s all treated documentary-style and the audience is supposed to recognize and identify with these characters.

Despite an apparent effort to be like “Modern Family,” this show doesn’t come close to it. The main difference: The writers of this show cannot resist trafficking in the kind of vulgarity that has come to typify the comedies on CBS. The premiere episode of “Life in Pieces” has so many casual conversations about bowel movements and sex organs that you might find yourself screaming at your TV set to make them stop.

I realize that this kind of material is actually quite popular, at least where the hit comedies on CBS are concerned. But the premiere episode of “Life in Pieces” contains very little to like -- most notably the characters.