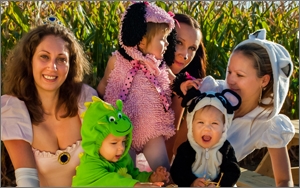 The National Retail Federation predicts that while 157 million people in the U.S. will celebrate Halloween somehow, they’ll spend a little less than they did last year: About $74.34 per family, compared with $77.52 last year.

With some 78% of its respondents saying they intend to rein in their candy-corn colored enthusiasm, the Washington D.C.-based trade expects total spending for the holiday to reach about $6.9 billion, including candy, costumes, parties and decorations. That’s a decrease from $7.4 billion last year.

Costumes, as always, represent a big chunk of family’s holiday spending. This year, expect to meet plenty of Minions, Star Wars characters and princesses out trick or treating.

And among grown-ups—while “witch” came in as the top adult costume for the 11th year in a row—Star Wars characters and Batman are among the most popular. Families will spend about $27.33 for costumes, including $1.2 billion on adult get-ups and $950 million on children. The Washington D.C.-based trade group is also predicting about 20 million people will dress up their pets, spending about $350 million.

Treats are also a big portion of the budget, with almost 94% of the people surveyed planning to buy Halloween candy, spending about $2.1 billion. And two in five intend to decorate their yard or home, generating another $1.9 billion for retailers.

The survey, based on some 6,700 people and conducted by Prosper Insights, found that those in the West are slightly more likely to celebrate the holiday, with those in the South the least likely to do so.

2 comments about "NRF Says Consumers Cutting Back For Halloween".
Check to receive email when comments are posted.
Read more comments >
Next story loading