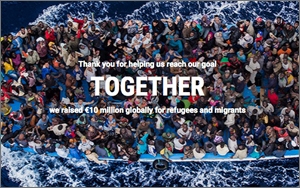 While the surging tide of refugees entering Europe has riveted the world’s attention, most U.S. companies are keeping their distance — at least in ways that might catch a consumer’s eye.

Google is one high-profile exception, raising more than $11 million in its matching-donation campaign, and TripAdvisor another. But more companies are simply making quiet philanthropic gifts. And the recent spot pleading for contributions to the World Food Programme didn’t reveal the names of any of its backers, a list that includes McDonald’s, Burger King, Facebook, Google, MasterCard and United Airlines.

So in an era when just about every earthquake, hurricane or tsunami triggers an overnight cascade of hashtagged brand-linked fund-raising, what gives? Part of the reluctance is geography: It’s a crisis happening on the doorsteps of countries many Americans couldn’t even find on a map.

Part of it is a growing national ambivalence about outsiders, with American’s anti-Muslim sentiment growing and our own migrant problems dominating election debates. It all adds up to a tepid cup of compassion: A recent CNN/ORC poll finds that while overall, 55% of Americans believe the U.S. has a responsibility to help, the divide along party lines is sharp. Most Republicans oppose the idea, and most Democrats support it.

“This crisis is very different than a natural disaster,” says Abby Safirstein, a senior member of the marketing team for Save The Children, a Connecticut-based charity closely involved in providing aid for the migrants. “American media has always seen this as political, so it’s much harder to fundraise.”

“What we’re seeing is contributions being made quite quickly to this emerging humanitarian need,” says David Hessekiel, president of the Cause Marketing Forum. “CEOs are getting advice about how to respond to a terrible crisis. But right now, that’s as far as it goes. We’re not hearing companies saying that they are going to focus on this as on ongoing cause.”

That’s not to say some haven’t been generous, making large contributions to relief organizations, including Save the Children, International Relief, UNHCR, and Doctors Without Borders. (Except for Google, Silicon Valley seems unmoved, reports the Washington Post.) But so far, activity is almost entirely philanthropic, rather than cause-related or even consumer facing.

Countries like Germany are actively positioning themselves as open and welcoming, he tells Marketing Daily, “it’s hard to speak about America in terms of unified position about immigration.”

For TripAdvisor, which says 34% of U.S. users planning an international trip view pages for destinations within the European Union, it was a natural decision. “Everyone felt a little paralyzed,” says TripAdvisor CMO Barbara Messing, explaining the decision to get involved. “So many people wanted a way to help, but they didn’t know how.”

Besides putting up banners on its site, TripAdvisor sent email requests to members promising to match donations. “We got over $575,000 in donations the first 48 hours,” she says. (The company also started a two-for-one employee donation program, and is offering five vacation days to staff members who want to travel to volunteer.)

Safirstein thinks more brands will join in such efforts, as media coverage continues to build, and conversations about how to help become more mainstream, in the U.S.

“That one photograph of the drowned little boy had so much impact,” she says. “As people in the U.S. begin to understand that people are so desperate that they are risking their own lives, they’ll become more interested. Not just American companies, but the American public. It put a very human face on the whole crisis.”