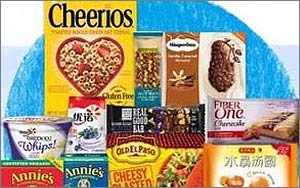 Leveraging the e-commerce channel, as well as continued, aggressive focus on expanding and innovating with "better for you" brands, is key in General Mills' growth strategy, the company's leaders stressed this week, during a first-quarter earnings call.

While online sales currently account for 1% to 2% of its overall sales,  Shawn O’Grady, SVP and president, sales and channel development, said that online is the company's fastest-growing sales channel, and noted that projections over the next four to five years are in the 5% to 6% range.

Further, CEO Ken Powell reported that in some markets, including France and the U.K., online sales for some categories are near 10%, "so it's pretty  clear that we're going to move in that direction very rapidly in the U.S."

The executives confirmed that General Mills is investing to increase its e-commerce capabilities, including establishing an e-commerce "center of excellence" to drive efficient, rapid growth in the channel.

All of the big food companies are increasingly focused on expanding their presence in e-commerce and in alternate physical formats like natural/organic, club and dollar stores that are stealing share from traditional supermarkets.

Mondelez International, for instance, this month announced that its goal is to increase its e-commerce sales from its current $100 million to $1 billion by 2020. PepsiCo, which recently hired Gibu Thomas, previously head of mobile and digital initiatives for Wal-Mart, to lead its own e-commerce push, sees e-commerce as "the next great revolution in the food and beverage industry," PepsiCo CEO Indra Nooyi said at the company's annual shareholder meeting this year.

While just 1% of the $600 billion in U.S. food and beverage sales currently take place online, BI Intelligence projects compound annual growth of 21.1% between 2013 and 2018, to reach $18 billion — versus a projected CAGR of just 3.1% for offline grocery sales during the same period.

That reflects willingness on the part of younger consumers, in particular, to pay for the convenience of grocery delivery, as well as the rapidly increasing availability of such options in the United States.

As Amazon expands its fulfillment facilities and rapid grocery delivery options in markets across the country, particularly through its Prime membership offering, Wal-Mart has responded by ramping up its own e-commerce business.  Wal-Mart, too, is building new distribution centers, along with leveraging its massive physical store infrastructure to offer consumers the increasingly popular option of ordering online and picking up in store — or, in the case of groceries, picking up orders at a now rapidly expanding number of locations being constructed in the parking lots of its Supercenters and Neighborhood Markets.

Further, a growing number of grocery retailers, including Kroger and other leaders, are partnering with delivery services like Instacart and Shipt to offer home grocery delivery without having to make huge investments in developing their own delivery infrastructures.

While trying to compete effectively with the likes of Amazon through their own e-commerce sites is a formidably costly prospect for food and beverage companies, all are determined to ensure that their expanding ranges of "natural" brands (like General Mills' recently acquired Annie's brand) and their simplified mainstream brands (gluten-free, free of artificial ingredients) are part of consumers' online grocery shopping orders.

Online grocery sales growth has continued to be constrained by many consumers' hesitance about not being able to see and feel produce and other fresh items during shopping. But that concern is expected to lessen as grocery delivery and click-and-collect availability and adoption widen, and ordering staple packaged foods online is already an increasingly attractive time-saving (and in volume, even cost-saving) option.