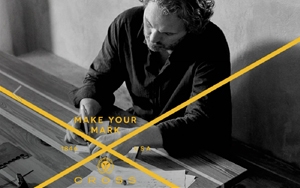 Famed writing instrument brand Cross, founded in 1849, has struggled since the ‘90s for some very obvious reasons. Does anyone still know how to write longhand? The brand, famous for those slim, crenelated, and unadorned chrome and gold ballpoints, and for space travels, is making a bid for reinvention, with a new logo, and a strategic plan to do what rivals like Mont Blanc have done: expand into other products, including premium leather goods, timepieces and even luggage, through licensing partnerships.

And the Lincoln, R.I.-based company is launching its first marketing communications effort since the ‘90s. The rebranding campaign touts Cross as a luxury brand with a history and a future, and introduces a new logo, incorporating the original Cross gold and black lion. Says Oliver Bootmann, global brand director. “We looked at the archives, and there was that line used in 1860s, and there was the lion logo. We developed it to be more contemporary, also as sign of how determined we are.”

The advertising campaign aims to entice younger luxury seekers who are, pointedly (no pun intended), ascendent, but not bona fide celebs. That, says Bootmann, sets it apart from others like Mont Blanc, whose marketing features famous folks in entertainment and other fields. Cross’s campaign profiles Peter Thum, who founded Ethos Water and Fonderie 47, an effort to get AK-47’s out of Africa war zones. He gets them, then melts them down for jewelry. Cross is helping out with that and will produce a limited-edition pen at the end of the year made with metal culled from one of the assault guns. Also spotlighted are Kate Davis, a multi-instrumentalist and singer-songwriter who has made MTV’s “15 Fresh Females Who Will Rule Pop”; Cris Cab, also a singer-songwriter, whose next album is being produced by Pharrell Williams; and polymath artist, writer, businessman Oyama Enrico Isamu Letter.

Bootmann, who joined Cross last year from Swarovski AG's North American unit, tells Marketing Daily that Cross has pretty much been silent since 2000. “The last big campaign was mid ’90s, when writing was still big.” He adds that Cross's heyday was the the ‘70s and ‘80s, when the company was five times its present size. The new campaign focuses on key markets like Japan, the U.S. and the U.K. “Our toughest job is here, where writing is not as popular as in Europe and Asia. But it's a key market; we are an American brand.”

The company, which now owns another famous scrivener's brand, Schaffer, is targeting an “expressive consumer, someone who thinks writing still matters, who like to express ideas thoughts and feelings on paper, and see a writing instrument as they would a nice car, suit or a Rolex that shows status and expresses fashion style.”

Bootmann says the effort, whose visual profiles of the artists are in black and white, is 60% digital, with print beginning in Monocle magazine in November and running through next year. He says Cross will also run print regionally in the other key global markets; the plan is to feature a raft of new influencers each year, as well as add out-of-home elements. The company also launched a new web site and a campaign microsite, and social media elements. The agencies involved: L.A.-based influencer agency Xomad;New York-based creative brand consultancy Graj+Gustavsen; and entertainment marketing firm Brand Synergy Group, also based in New York.

As for where the craft is heading, he concedes that handwriting may never be what it was, but it will never go away. “No, it will never be as big as it used to be; we will never sell as many pens as we did even in the Nineties. But the music LP also nearly vanished, and now there is a revival. It's cool and old school. So we have to be clever and creative by developing cool pens you want to own, and cool campaigns.”