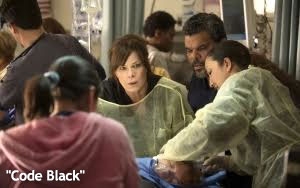 Just watching “Code Black” is exhausting enough. One can only imagine what it must be like to actually be in the show.

Can actors playing stressed-out emergency room doctors develop real symptoms of post-traumatic stress disorder? If any actors are susceptible, it would be the ones in “Code Black.”

The premiere episode of this new CBS medical drama is just 44 minutes long, but the show’s fictional doctors will save at least five lives in over-crowded emergency-room conditions using methods ranging from power tools (specifically, a handy power drill) to one unorthodox treatment whose effectiveness is unproven (but, you can bet your bottom dollar, it is proven effective here).

On this show, which takes up residence on CBS Wednesday night, it’s all in a day’s work for these heroic ER docs, for whom “code black” conditions are commonplace. “Code black” is the designation given to the most extreme conditions possible in this emergency room when the number of grievous emergencies needing to be attended to simultaneously reaches some sort of critical mass.

For these docs working in an L.A. hospital ER, a “code black” condition is declared somewhere in the middle of the premiere episode of “Code Black.” But to a viewer, this ER seems to be in the midst of a “code black” at all times, whether anyone chooses to formally designate it or not.

The promos for this show tell us that the “average” hospital ER experiences five code blacks a year. In this TV show, the fictional Angels Memorial Hospital “is in code black 300 times a year.” Good golly, Miss Molly -- that’s a lotta code blacks!

Certainly, a near-constant code black condition in a hospital emergency room provides a fertile foundation for television-style drama. And “Code Black” is nothing if not proficient at telling its stories in all their gory detail in just a few minutes (if not seconds) at breakneck speed. The show has many stories to tell and lives to save, so time and speed are of the essence.

It is a glossy, bloody production -- like the medical-show equivalent of the “CSI” shows on CBS. Like those shows, the ensemble of characters in “Code Black” are heroes, first and foremost, but you also get hints of flawed or at least traumatic private backstories designed to humanize them.

One young male doctor, for example, reveals he is a recovering drug addict, which gives him insight into the problems of one of the emergency-room patients (he turns out to be wrong about her, however). He is one of a group of wide-eyed residents who are beginning tours of duty in this hospital ER under the supervision of a hard-nosed veteran MD played by Marcia Gay Harden and a veteran male nurse played by Luis Guzman. In the premiere, he gives the best performance, which isn’t surprising if you are familiar with his work. “Code Black” also stars Kevin Dunn as the ER’s supervisor and Bonnie Somerville as a middle-aged mom taking up a new career as a doctor.

In “Code Black,” the life-or-death decisions and medical miracle-making are laid on so thick that you might develop symptoms of PTSD yourself just by watching it. At times, it all feels unbelievable, since you expect these doctors to collapse one by one from exhaustion after only one shift in this horrible workplace. But they don’t collapse, of course, and before you know it, 22 victims of an apartment house fire are being rushed in the door and everyone gets fired up once again.

It’s an understatement to say “Code Black” tugs at your heartstrings. On the contrary, it yanks on them and, in the process, demands that you pay attention. It feels like a hit show.