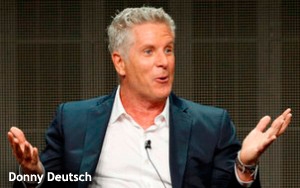 If you can’t keep your shirt on in anticipation of Donny Deutsch’s new sitcom “Donny!” then you’re not alone. Deutsch can’t keep his shirt on either.

The 57-year-old adman takes it off frequently in the show’s first two episodes obtained by Television News Daily. It is true that he goes shirtless in both shows in the service of each episode’s plot. But he is so often seen naked from the waist up that you begin to wonder if the writers of the show contrived these stories to save money on the upper half of his wardrobe.

In the first episode -- titled “A Sext Ruined My Life,” scheduled to premiere Tuesday, Nov. 10 on USA Network -- Donny gets into trouble after he sends a shirtless photo to his girlfriend, but in the process mistakenly sends it to everyone he knows.

In the second episode airing a week later -- titled “Foxy at 50” -- Donny has his shirt off for what seems like half the show as he finds himself in a series of sexual situations primarily with guest-star Christie Brinkley.

While shirtless Donny emerges as a motif running through both episodes, the episodes are quite different in one important way: The first one is funny and the second one is not.

In the premiere, we first meet this fictional Donny Deutsch on the job as the host of an afternoon TV talk show called “Donny!” He is in the midst of interviewing a tearful young woman who is the centerpiece of this episode of his talk show titled “A Sext Ruined My Life.” The show, on which Donny warns his audience against the dangers of careless sexting, is the reason Donny gets in trouble for his own picture sexting later.

The episode works for one simple reason: It is constructed like a long joke, starting with an elaborate setup and ending with a punchline that was smart and unexpected.

An attempt is made at much the same thing in Episode Two -- a long set-up and then a punchline to pay it off at the end. But the problem is that the setup is vulgar and the payoff is weak, particularly when you consider that many of those who may tune in for this show will have already abandoned it long before the punchline.

Or maybe I’m misjudging the culture’s tolerance for a sitcom plot about pubic hair. That happens to be the subject of this episode: To groom or not to groom, that is the question.

“It’s different for a man and woman,” Donny tells his female executive producer (played by Emily Tarver) in a workplace conversation that would get most people fired.

“So you don’t do anything to your crotch hair and you expect a woman to be groomed perfectly to your liking?” she asks him after he’s just informed her he doesn’t manscape below the waist. “You’re a pubic hypocrite!” she declares. I would have gone with: “You’re Pubic Enemy No. 1!” But what do I know -- I’m not a TV writer.

In a subsequent conversation on the same subject, this same producer will refer to Deutsch’s pubic hair as his “little Jew poof,” another phrase I never heard before but now I have, thanks to TV.

“Donny!” is styled as a semi-fictional take on Deutsch’s real life. On the show, he’s a man about town and media figure acquainted with various New York City notables such as Joe Scarborough and Mica Brzezinski of MSNBC’s “Morning Joe” (both seen in Episode One) and Hoda Kotb and Kathie Lee Gifford (seen in Episode Two).

Much of “Donny!” is filmed in Deutsch’s own home, a posh townhouse on Manhattan’s Upper East Side that was featured in Architectural Digest in 2011. Seeing the inside of this house, with its high-end art by the likes of Andy Warhol, Keith Haring and Jean-Michel Basquiat hanging on its walls, is one reason to watch this show -- if you’re not too distracted by the sight of Donny parading around half naked in it.

Advertising types take note: Once in each episode, Donny suddenly faces a camera and recites advertising copy on behalf of a product he holds in position next to his head. The first one is a bottle of Hak’s Chipotle Bourbon Barbecue Sauce, and in the second episode it’s a bottle of Purity Vodka. The in-show ads come without warning and with little or no context relating the product to the show. Maybe they represent a stroke of advertising genius on Deutsch’s part -- but what do I know, I’m not an adman.